Dr. Christopher Wozny can teach you to make “Gack” or construct a projectile launcher.

But he maintains that while these projects are fun, there are intricate and fascinating scientific processes behind them. 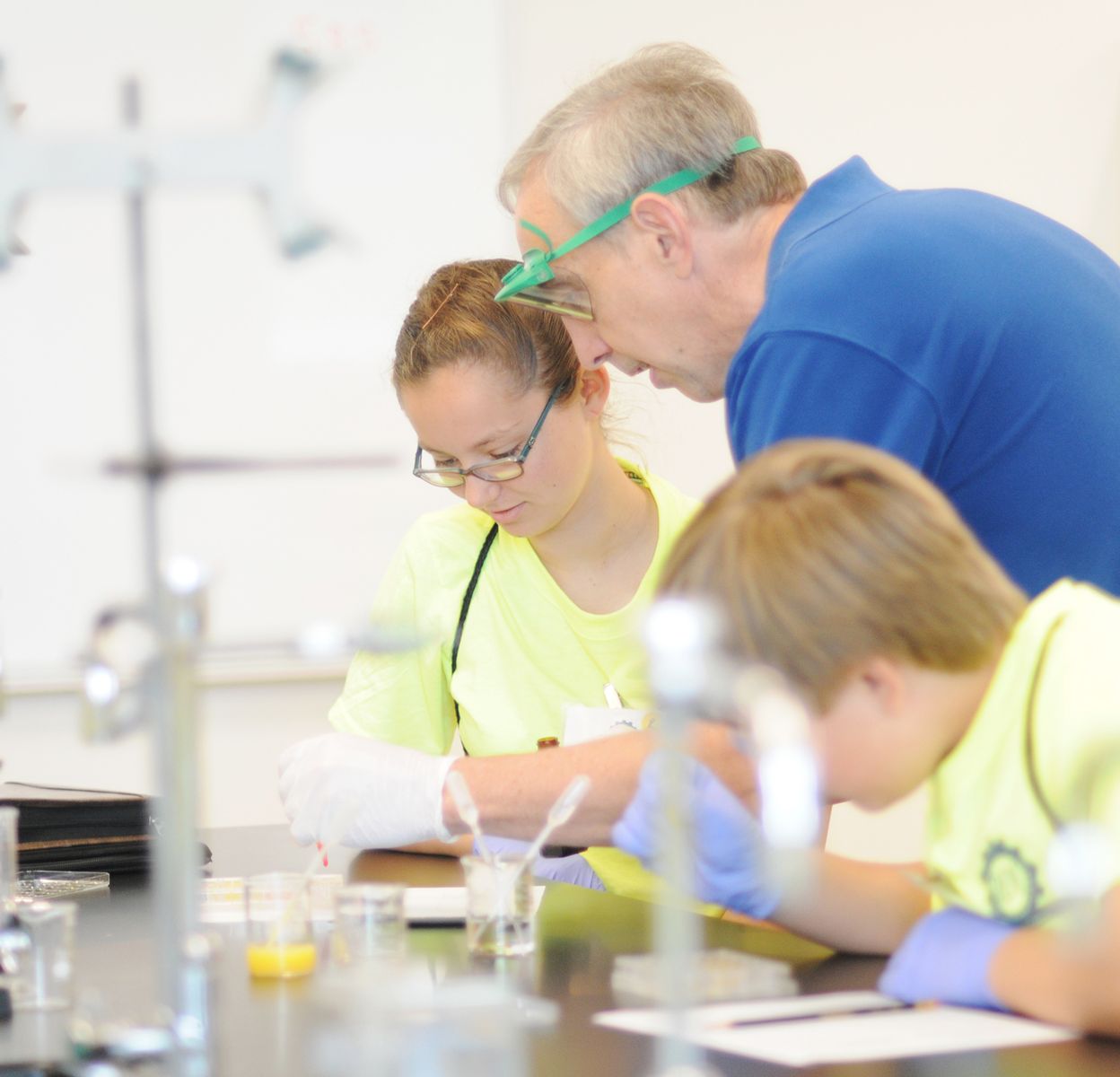 “I try to get beyond the ‘gee whiz’ nature of science and the ‘oh, look at this fun stuff we made,’” the associate professor of chemistry and​ physics at Dalton State said. “I want to make sure to connect to the processes of science; how scientists think, how we behave, collecting data, doing observations, discovering patterns, drawing conclusions. To me, that’s more important and a significant part of what I try to do.”

Wozny began teaching in the School of Science, Technology and Mathematics at Dalton State in the fall of 2013. He has already become heavily involved with the Dalton community.

He spent 16 years at Waycross College in South Georgia, where he served on multiple boards for community involvement with science programming, organized summer workshops for science teachers, and was in charge of the Elementary Science Olympiad, a competitive tournament for children from kindergarten through sixth grade.

Last spring, Dr. Randall Griffus, dean of the School of Science, Technology and Mathematics, asked Wozny to represent the College at the Design, Engineering and Manufacturing Camp.

“We are very fortunate to have Dr. Wozny. He has a very broad range of capabilities and qualifications,” said Griffus.

The idea for DEM Camp came about from the Archway Partnership, a University of Georgia outreach program designed to help the community improve opportunities for education, quality of life, and the economy. The first camp was in 2011, and has been supported since then by organizations such as Shaw Industries, Mohawk Industries, the Greater Dalton Chamber of Commerce, Georgia Northwestern Technical College, and Dalton State.

The camp is held for one week during June at the Northwest Georgia College and Career Academy. Rising sixth-, seventh-, and eighth-graders have the opportunity to attend workshops to learn about advanced manufacturing skills and the carpet industry.

“I tried to come up with things that would be appealing, that would be motivating, and that I would be able to point in those directions,” said Wozny. “That’s what I try to do with all the different activities: take whomever I’m talking to, where they stand, and then engage them with ideas that they’ll hopefully find fascinating, and then point them in the direction of, ‘well, there’s more going on here; we’re just getting started.’”

This year, DEM campers came to Dalton State’s campus for one morning, where Wozny worked with them on the color spectrum, color absorption and reflection, acids and bases, and titration.

“He is so helpful and last year, he brought needed equipment to the Northwest Georgia College and Career Academy,” said Barbara Ward, director of workforce development for the Greater Dalton Chamber of Commerce and a chief architect of DEM Camp. “We are glad he was able to assist again this year and that Dr. Griffus allowed the chemical segment to be held at Peeples Hall so that the students can be introduced to the Dalton State campus.”

Last fall, Wozny began participating in Sensational Science, a program for all ages at the Dalton-Whitfield Library. Each week, he leads the group in hands-on and interactive experiments and activities, from simple chromatography to projectile launchers or using microscopes.

His main goal with all of his involvement as an educator is to show others that science is not always black and white, and it is not impossible. 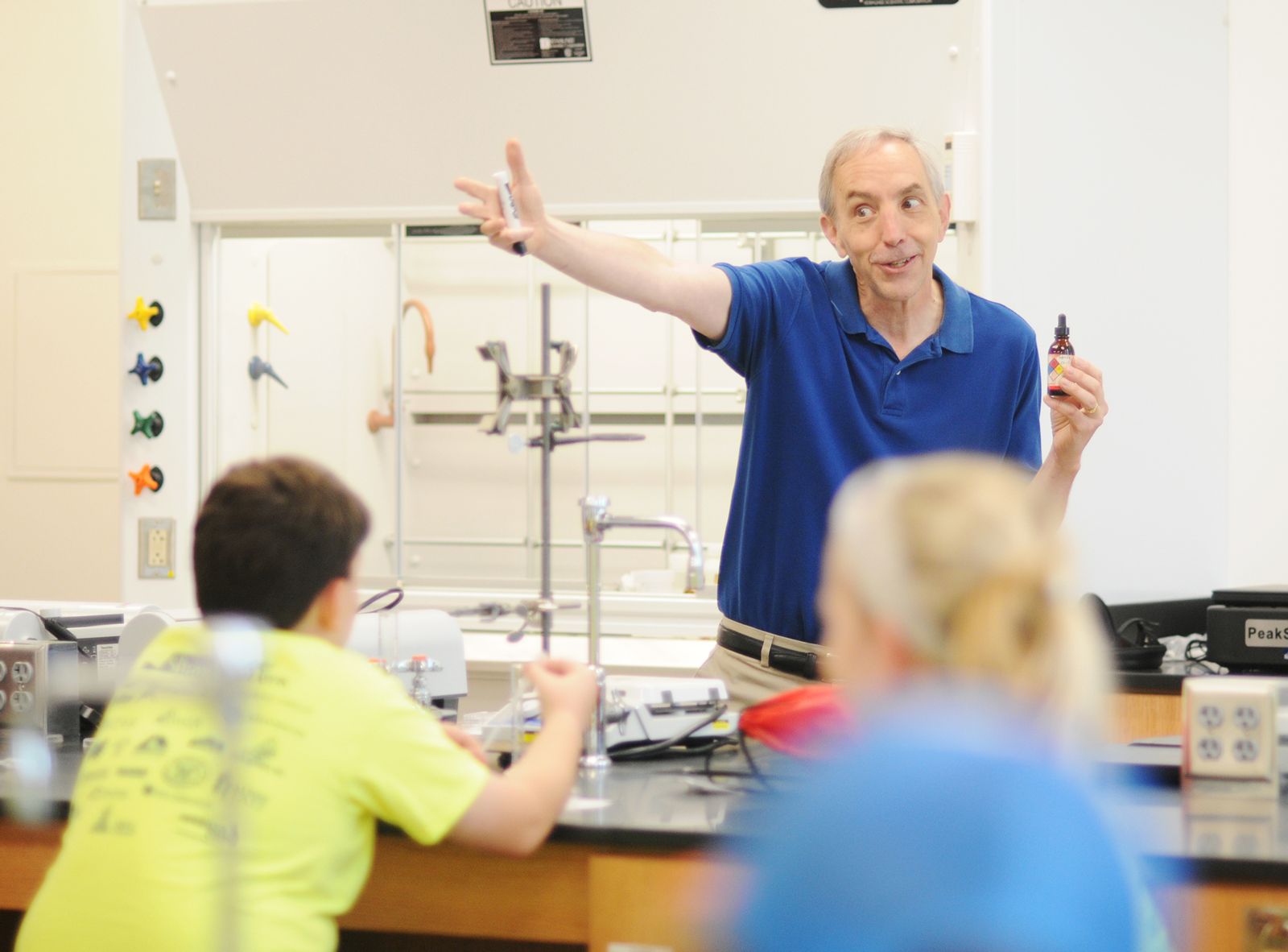 When his children were younger, Wozny went into a toy store and saw a microscope. On the box was a young boy wearing glasses and a lab coat, clutching a clipboard.

“I thought to myself at the time, ‘That is so wrong. It is telling a lie.’ That kind of image, that kind of stereotypical thinking about what science is, and what scientists do is not right. There are scientists who wear lab coats and who carry clipboards, but eight-year-old boys don’t do that. There’s a lot more to science than just that,” he said.

Though Wozny knows some people are intimidated by the sciences, he says that there’s nothing to be afraid of.

“It is certainly true that there are many difficult, complicated concepts in science, and I don’t see that as a bad thing,” he said. “I approach the public the same way I do students at Dalton State. I explain scientific concepts at a level  that is understandable and clear to them, and give them the motivation to try to understand how the universe around us works.”​