The newest members of the Roadrunner Nation won’t be found in class beside you.

They’re babies. They are turtle hatchlings to be exact, and the first born in Dalton State’s Turtle Assurance Colony. 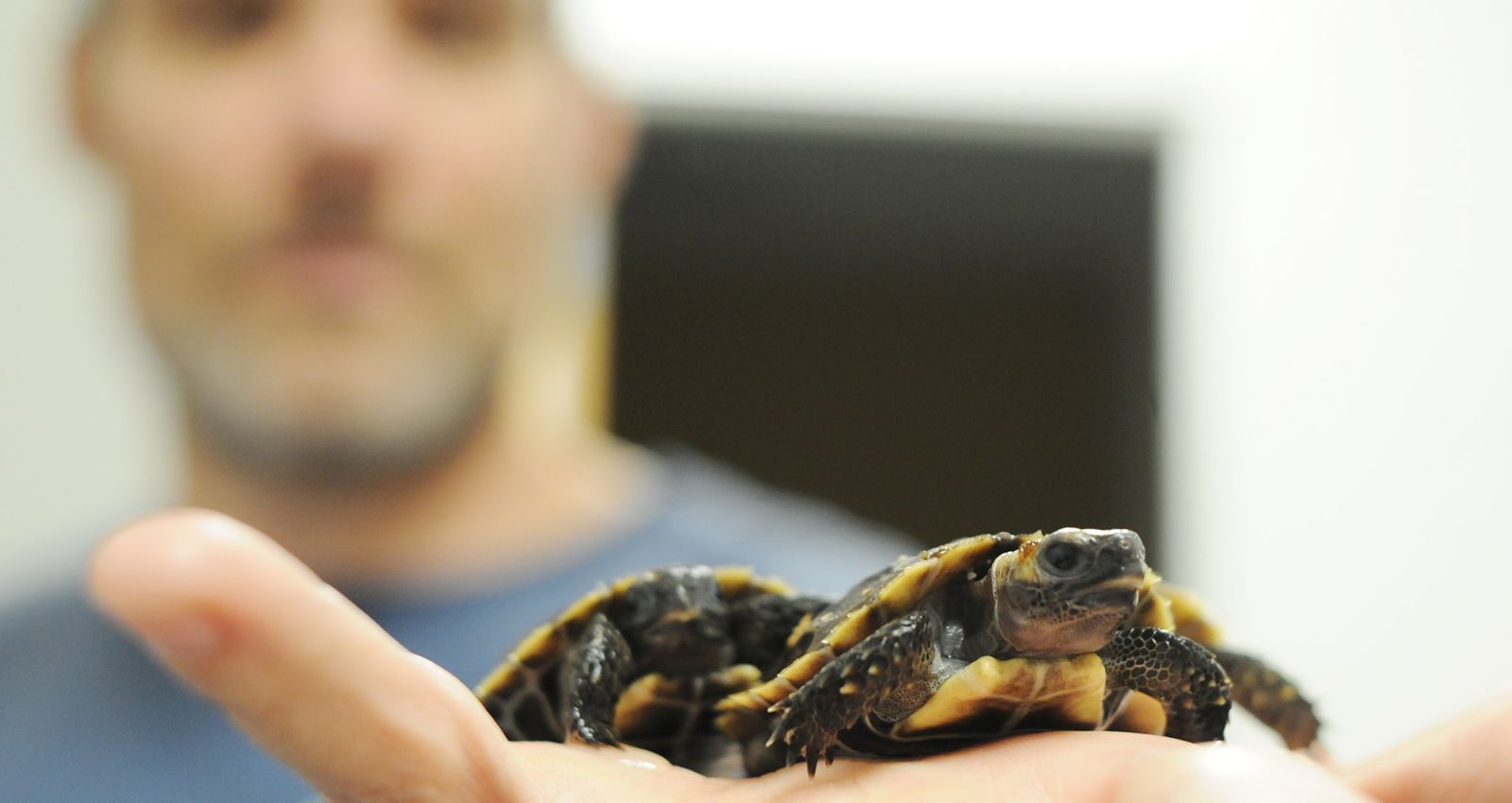 The colony is part of the international Turtle Survival Alliance, which is a conservation group formed in response to the disappearance of turtles in Asia where they are sought for food. Members of TSA try to encourage breeding of endangered turtle species from different regions around the world. The College’s colony is less than a year old.

The three hatchlings are Home’s Hingeback Tortoises (Kinixys homeana), which is a species native to central Africa. They are on the endangered list.

“These turtles are our first official success,” said Chris Manis, a part-time instructor in natural sciences and research associate who oversees the colony. “They were conceived here, the eggs developed here, and they hatched here. This species is rarely successfully bred in captivity. And to do so in less than a year gives us a lot of promise for what we’ll be able to achieve with this colony.”

The work being done at Dalton State could help ensure the survival of several species. Currently the College is home to eight different endangered turtle species. Manis and other members of the faculty and staff, as well as some students, help care for the animals.

All turtles need stability in order to breed, Manis said. Other than that, the species have different temperature, climate, and dietary needs to encourage mating.

For the hingeback tortoises, Manis has found a correlation in feeding the female protein and successful mating.

The hingeback tortoises are scavengers, feeding off the remains of other animals’ prey. The tortoises eat the remaining animal, bones and all. This gives the female high levels of protein and calcium, which she needs to make and lay eggs, Manis explained.

“It’s a huge energy expenditure for the female to make and lay eggs,” Manis said. “The female needs that sustenance before she can do it.” 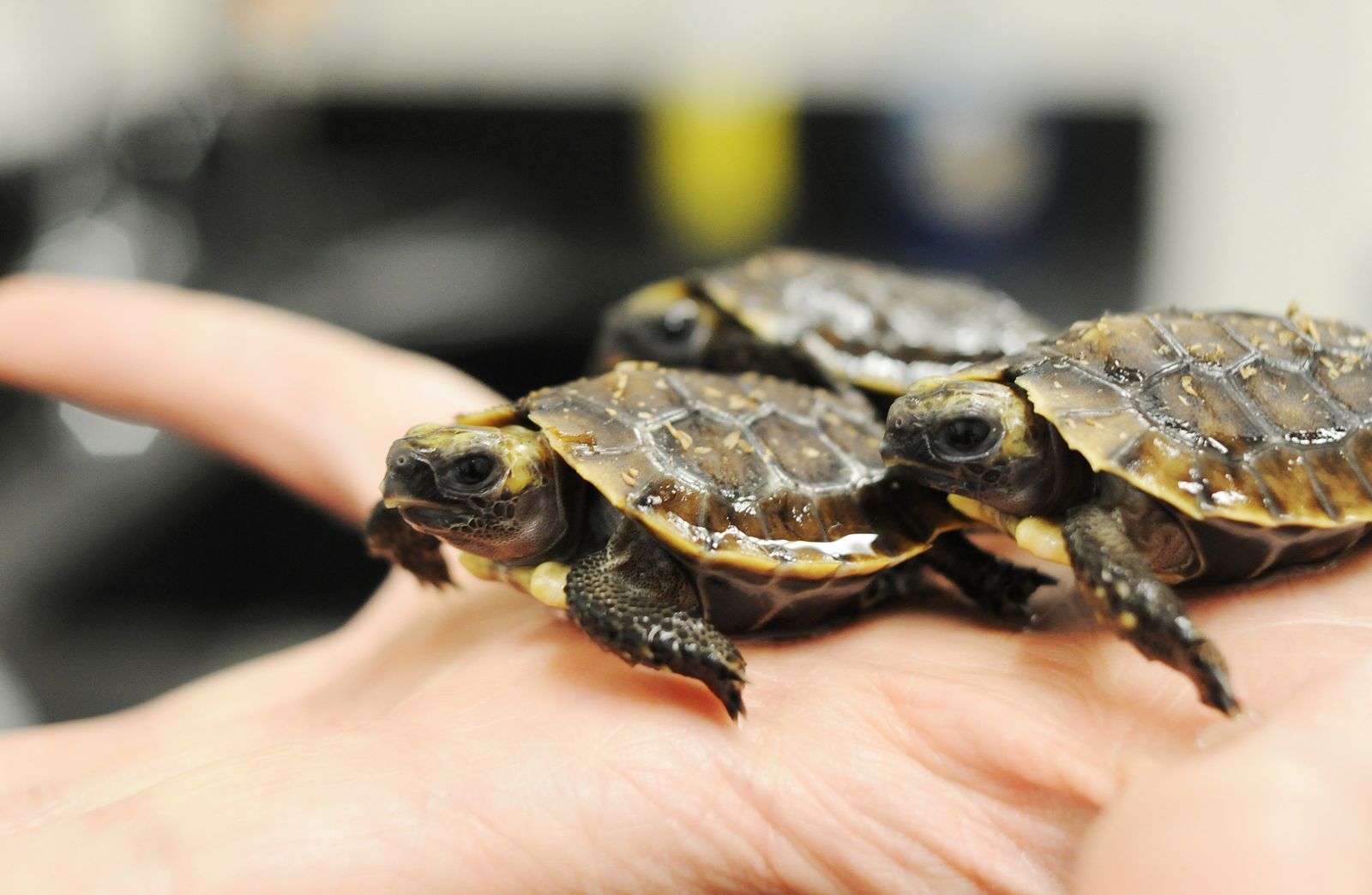 Manis has had success breeding this species prior to the formation of the colony at the College. He had two viable turtle hatchlings. But they had deformities he thinks were caused by incubating the eggs at too high a temperature. This time, he lowered the temperature to around 82 degrees.

The hatchlings seem to be in robust health, Manis said.

For the first week after hatching, turtles live off their yolk sac. They need no extra care. Now, Manis and his team will begin to feed the hatchlings, give them regular access to a tub of water in which to soak, and keep their habitat clean.

The turtles won’t reach sexual maturity for several years. At that time, they may be traded to other members of the TSA, such as the Tennessee Aquarium, for mating. Manis said it is important to keep the gene pool deep and diverse while trying to save the animals from extinction.

It is not known just how long this species can live, though Manis believes it is several decades. He said the lifespan of turtles hasn’t been studied in depth because of their longevity. It could take several generations of researchers since turtles typically outlive humans. The hingebacks are no exception. The turtles born recently at Dalton State will likely outlive most of the students currently enrolled in classes there.

“We’re really proud of the work being done by Manis and the others,” said Dr. Randall Griffus, dean of the School of Science, Technology, and Mathematics. “We think this colony will provide a great tool for research for our faculty and students, while helping save several species of endangered turtles.”