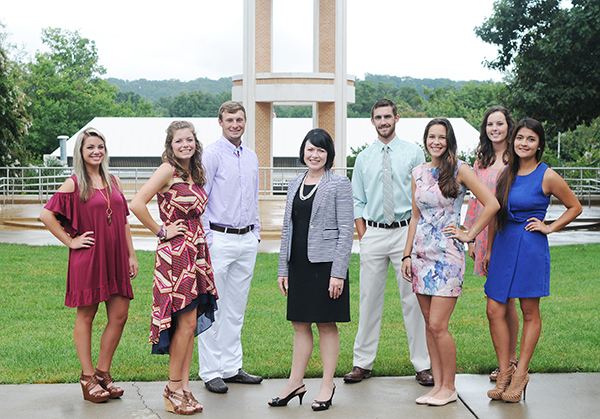 Had Laura Winter stayed in her native Germany, she wouldn’t have had the opportunity to pursue both an education and tennis.

There are no collegiate sports in Germany. So she chose Dalton State where she could dedicate her time to studying business management and playing tennis.

It has paid off for Winter. She has excelled in both areas.

Winter and teammate Alejandro Bejarano were named NAIA Daktronics Scholar Athletes for maintaining a 3.5 grade-point average or higher. They join several other athletes who were recently recognized for their academic achievements.

“It’s great to be honored in not just my sport, but also for academics,” Winter said. “It’s all very important to me. I’m happy to be in the U.S. where I can pursue both and be honored for both.”

Women’s Tennis Coach Michelle Bates emphasizes the importance of academics to her team.

“I’m extremely proud of these ladies,” Bates said. “Academic achievement comes first. That’s what will carry them through life.”

Nix said he and his teammates push each other to do better in class.

“It’s what will be helpful to my future,” Nix said. “Academics is at the top of my list. I love the challenge of it. I would love to try to play professional golf, but I’m planning to go to law school if that doesn’t work out.”

Women’s Golf Coach Jim McGrew said scholarly athletes are what he and the other coaches recruit.

“That’s the kind of athletes we want here at Dalton State,” he said. “We want athletes that can win championships, but that also do well in academics. In golf we sometimes leave to play on a Saturday and don’t get back until Tuesday night. They have to go to class exhausted and make up the work they’ve missed while at a tournament. They work hard. And we appreciate the faculty and staff who works with the athletes to help them succeed in both areas.”

Dr. Margaret Venable, interim president of Dalton State, says she is proud to have so many athletes recognized for their scholarship.

“I am more proud of the academic accomplishments than the athletic prowess of these students,” she said. “The fact they can combine golf and tennis skills with achievement in the classroom makes them true leaders.”