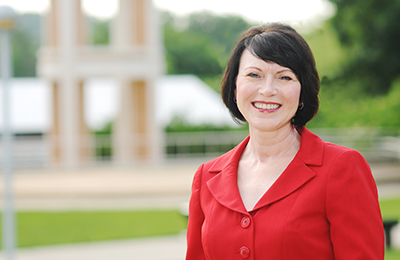 The Board of Regents of the University System of Georgia today named Dr. Margaret Venable as president of Dalton State College. The Board’s decision followed a recommendation by Chancellor Hank Huckaby and ends the interim status Venable has held at Dalton State since January 2015.

“Dr. Venable’s skills and experience with the University System are a tremendous asset and she has demonstrated a great capacity for leadership,” said Huckaby. “Her work as interim president has been impressive and we are excited about the future of Dalton State and our partnership with the Dalton community under Dr. Venable’s leadership as president.”

Venable was serving as provost and vice president for Academic Affairs at Gordon State College when she was asked to assume interim-presidential responsibilities at Dalton State upon the retirement of former President Dr. John Schwenn.

Venable’s experience within the University System of Georgia also includes the University of North Georgia’s Oconee Campus, where she served as vice president and chief executive officer. Before that Dr. Venable held a range of roles at Georgia Perimeter College, including: assistant vice president of Early Colleges and Academic Initiatives, interim dean of Sciences and Physical Education, interim dean of Academic Services and department chair of Science and Physical Education.

In 2008, Venable was selected as an American Council on Education (ACE) Fellow hosted by Southern Polytechnic State University.