Dr. James Adams finds beauty where many others don’t. But maybe it’s because he knows where to look.

He gently picks up a moth during an entomology lab at Lakeshore Park and shows the almost shimmering orange and yellow pattern on its wings.

“They’re beautiful,” said Adams, a lepidopterist and professor of biology at Dalton State.

He gathered students around and told them about the Ermine Moth, (Atteva aurea). The moth is active both during the day and at night and is common throughout Georgia. The class was at Lakeshore gathering specimens for an insect collection for his class and learning about the species who live in and around the wetlands.

Adams teaches entomology, and earned both his bachelor’s degree and doctorate in systematics and ecology from the University of Kansas.

“It’s a lot of fun,” Cody Cantrell, a student in the entomology class said while walking around a lake with a net and a bug jar full of specimens. “I like that this class is oriented around being outside. Dr. Adams makes class interactive, and it’s relaxed. I’ve learned a lot, and he’s more engaging than many other teachers I’ve ever had. He’s not shy about his passion. Even though the class is about all insects you know he loves moths and butterflies. He wears a different shirt with moths and butterflies on it every day.”

Adams helped students capture dragonflies and damselflies hovering over the wetlands at the park. He pointed out different types of insects required for the collection, showed them how to handle them, let them know when there was danger in handling them, and showed them how to touch carpenter bees buzzing around flowers. Most insects have a hard, or sclerotized, exoskeleton, which makes them unphased by humans touching them. 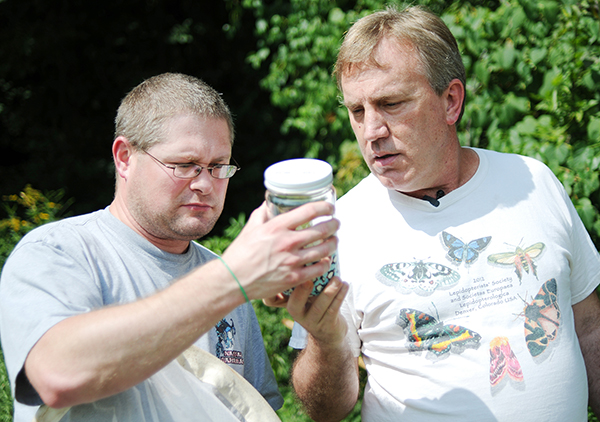 With moths or butterflies, the lepidopterist took great care in handling and showing their delicate and colorful features, flipping some over to reveal colorful patterns under their wings.

They are insects he has studied since childhood while in his mother’s gardens.

“My mom (Eleaner R. Adams) said I would go around her garden and pick them up carefully, even as a young child,” Adams said. “She was my first mentor. I was studying moths even as young as 8 or 9.”

As an older child and into his early teen years, Adams studied moths with renowned lepidopterist Dr. John Heitzman, who died in 2013. Adams had contacted Heitzman to ask his advice about shelling out $250 for a lifetime membership to the Lepidopterist’s Society – which for Adams, who has been a member now for decades, ended up being quite a bargain.

“When I talked to him on the phone, I mentioned I had never seen Io moths before,” he said. “I knew I liked him when I walked in his door and he gave me two of them. He took me on moth hunts when I was younger. I was fortunate to have connected with such a great mentor at a young age.”

“There are plenty of moths to study,” he said. “They are nocturnal and less is known about them. There is simply more moth diversity.”

After obtaining his degrees from the University of Kansas, Adams thought he would head west, thinking that’s where he’d find more diversity in moth species. But then he was asked to interview for a job at Dalton State.

“When I interviewed for the position here I didn’t think I would get it because they needed an anatomy and physiology professor,” Adams said. “That’s not my background. But I thought it would be good to practice my interviewing skills. I got the job, and now that’s the class I have taught the longest. I’ve enjoyed it, and I know it well now. I’ve taught A&P 50 times in the last 25 years.

“I came where the job was. I was surprised because Georgia was a lot less known from a moth standpoint than I realized. It is a magnificently rich state. It is biodiverse. There are several different ecosystems. In North Georgia we find things at their southernmost point in the Appalachians. There are swamp and coastal ecosystems. I think Georgia will have more than 3,000 moth species when all have been discovered.”

Adams has discovered numerous species that have not yet been identified or named, though he knows others have collected them. He has discovered and named three species so far, but expects to name more.

One was discovered on his honeymoon in eastern Utah. He thanked his wife for understanding his collecting moths on their honeymoon by naming the newly discovered species, Plagiomimicus kathyae, after his wife Kathy. 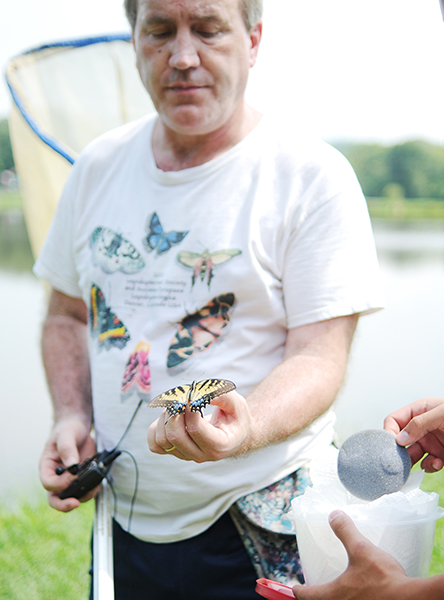 Another was found while working as an investigator to identify all species living in the Great Smoky Mountain National Park. There are at least 1,900 species of moths living in the park, Adams said. Lygdia wagneri was named after Dave Wagner who initiated the project at the park. It was discovered at 3,100 feet elevation and is the only member of its tribe in the Americas. Its closest relative is in Europe, Adams said.

“So it’s a very old species,” he said. “This is the only place this species has ever been found.”

Adams has also found a couple of gynandromorphs  – meaning they exhibit features of both males and females.

“You can’t just go out and look for them,” he said. “I’ve found two in my entire life. I was pretty excited. It’s obvious when you find one because they look so different. It’s a problem with normal chromosomal separation during meiosis.”

The discovery brought Adams into the national spotlight, earning him features on national media outlets.

Adams is so enthusiastic about his moths that he has approximately 30,000 in his collection. An entire room in his basement is dedicated to his collection.

Adams won the Dalton State Foundation’s Excellence in Teaching Award in 2012 and the Foundation’s Excellence in Professionalism Development Award in 2014 for his research and contributions to his field. He is also the editor of the Lepidopterist’s Society’s newsletter, The News of the Lepidopterist’s Society, and maintains a list of all species of moths found in Georgia and is working on one for Kansas.

“We’re fortunate to have him here at the College,” said Dr. Randall Griffus, dean of the School of Science, Technology, and Mathematics. “He is enthusiastic about teaching and the work he does in his field.”