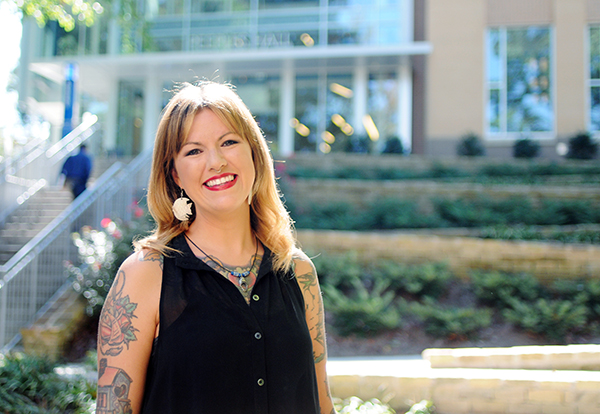 MaryAnn McBrayer was standing on the beach during her honeymoon when a  childhood passion was reawakened in her.

“I remember thinking, ‘What am I doing in the pre-nursing program?’” she said. “I don’t want to be a nurse.”

McBrayer, 32, had enrolled at Dalton State thinking the quickest way to a financially stable career was to earn her associate degree in nursing. She knew the College had a strong nursing program with successful graduates. As a hair stylist in Atlanta, the recession hit hard, and she needed a way to provide for herself and her young son Jackson.

“My sister had come to Dalton State,” McBrayer said. “It’s known for its nursing program. She is a mom and a nurse and is doing well for herself. I thought that was my path too.”

McBrayer’s path includes earning a bachelor’s of science in biology, which she expects to complete summer 2016. And it ends with her working as a marine biologist, specifically as an ichthyologist, a person who studies fish.

“I wasn’t aspiring to do more or be more because I did not believe I could,” she said. “Dalton State has changed that. I know I can do it. It has been cool to transition from not even knowing if I could be a college student to what my husband of two years, Matt, and I call talking like a scientist.”

A career as a stylist was easy for McBrayer, who loves fashion, makeup, and hair. She didn’t have confidence she could be a college graduate. So even though she loved the idea of being a marine biologist, she didn’t think she could succeed.

The recession began affecting McBrayer’s career as a stylist in 2008, and by 2012 she was no longer financially independent.

In the final months before leaving Atlanta, McBrayer was borrowing money from her mother to pay the rent. She spent an entire winter without being able to afford her gas bill because the prices had risen so high and she was making so little. 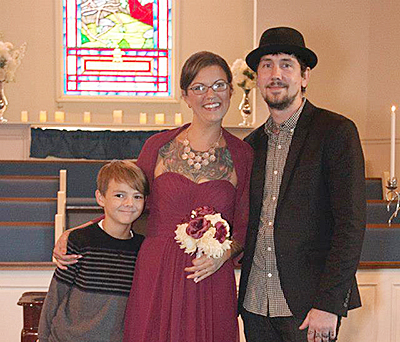 Her water was eventually shut off. Jackson was a toddler, and she knew her life had to change.

“I had been on a two-year downward spiral, and I couldn’t pay my bills,” McBrayer said. “I didn’t love my career as a stylist.”

She was struggling mentally and emotionally. She was in therapy for severe anxiety and depression and was fighting anorexia and bulimia.

McBrayer picked up her family, including Matt, and moved them to Dalton looking for a brighter, more financially stable life for everyone.

“Jackson was about to start pre-K. I needed to get my life on a different path,” she said. “I thought I should get a degree that would guarantee me a good job. I closed the Atlanta chapter of my life.”

It was the change she needed.

McBrayer wondered if she had made the right choice in enrolling at Dalton State. She was a nontraditional student pursuing a career she wasn’t excited about. She had to learn to study again and to balance school work with her responsibilities as a mother.

“This college changed me as a person, in the best possible way a person could be changed,” she said.

“Nursing is some people’s dream and passion, but it wasn’t mine,” she said. “I would have made a good living after two years and an associate’s degree, but it wasn’t what I truly wanted to do. I started thinking, ‘if I was giving Jackson advice, what would I say?’ I would advise him to pursue his dreams. It was a no brainer. I want to inspire him.”

Standing on the beach while celebrating her marriage to Matt, McBrayer knew it was time to make a change. She would major in biology, remain at Dalton State and follow her childhood dream.

“I said, ‘Matt, what do you think of marine biology?’” she said. “He said, ‘So when you’re done at Dalton State we get to live on the beach the rest of our lives? Let’s do it!’ It’s what makes sense for me. My bachelor’s degree is not the stopping point. It’s like graduating kindergarten in the life of a scientist. I want to be a research marine biologist. I need a doctorate to do so.”

Peeples Hall, which houses the science program at Dalton State, was under construction. Since its opening, students have had more undergraduate research opportunities and have been able to explore more fields in the sciences than was available before.

When McBrayer changed her major, she looked online for people to connect with. She saw Dr. Kim Hays’ background in ecotoxicology and research and emailed her. 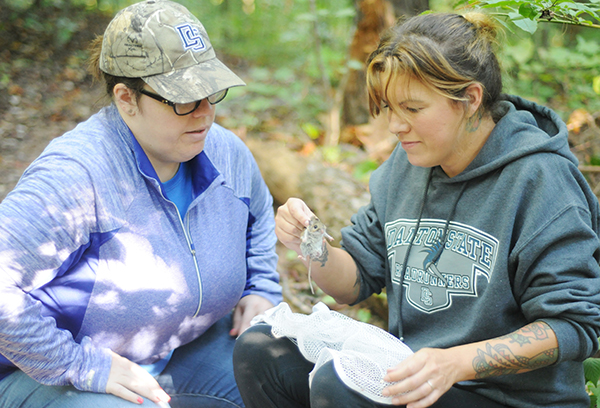 “Out of the blue I got an email from a student I had never met,” said Hays, an assistant professor of biology at Dalton State. “She was interested in research and knew what she wanted to do but didn’t know how to get there.”

Since then, Hays has become McBrayer’s professional mentor. Hays oversees McBrayer’s undergraduate research. Her first project was studying the ecotoxicology of yarrow. This year’s research is as a field assistant to Hays’ small mammal study which explores populations in disturbed ecosystems and slightly less disturbed ecosystems.

“At the time she was considering pursuing her master’s, but with the experience she’s had in the last few years here, I have convinced her to go straight into a doctorate program,” Hays said. “Not everyone can do that. I didn’t feel like I could do that after my undergrad. Having the opportunity to do undergraduate research in two different areas has given her the experience she needs. She’s a great student to have. She puts so much of herself in everything she does.”

When McBrayer joined Hays’ study, they were capturing small mammals every three months to collect data. The animals are rereleased in the area in which they are caught. McBrayer took the initiative to begin collecting data monthly.

“In many ways I feel like I’m her field assistant now,” Hays said. “And that’s great. She’s an independent worker, and that’s what you want in a doctoral candidate. You don’t have to hand hold. She’s self-motivated. She has the skills and the motivation to go straight to her doctorate.”

Graduate programs will look at a student’s involvement in research, and the faculty at Dalton State is proactive in providing opportunities for students.

“Students with research experience, like MaryAnn, will be the most sought after,” said Dr. David DesRochers, associate professor of biology. “We reach out to the community – not just Dalton, but the U.S. Forest Service, The Nature Conservancy, and help provide our students with opportunities to research and intern. We want to give them an advantage.

“MaryAnn is an exceptional student. She is enthusiastic and passionate. She’s always happy to be in class, especially labs. A doctoral program requires a lot of focus and commitment, and she’s prepared. Her enthusiasm will take her far.”

“In my evolution class, she’s my top student,” he said. “She always has a smile on her face, and she’s absorbed in the material. She tells me she’s upset to have to leave my class. She clearly has a passion for that biology degree. I can understand why she changed from nursing. She has found her calling.”

Tori Roy, recent Dalton State graduate who is now the administrative assistant in the School of Science, Technology, and Mathematics, also did research involving yarrow. The two worked closely together, though their research was different. 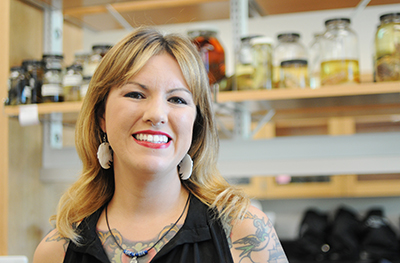 “She’s a totally different person than she was even a year ago,” Roy said. “Dalton State and her biology major have changed her. She is motivated, detail-oriented, and precise.”

Without Dalton State, McBrayer knows she wouldn’t be close to becoming a marine biologist.

“I expected to come here, go to class, and go home, then get my degree,” she said. “I never imagined I’d make the connection to this school and the people here that I have. That connection helps me be successful. I never expected to have as much pride in the school as I have.”

Even though her life will take her elsewhere, McBrayer is sure she’ll come back to visit and give back to the College that has helped her achieve her dream.