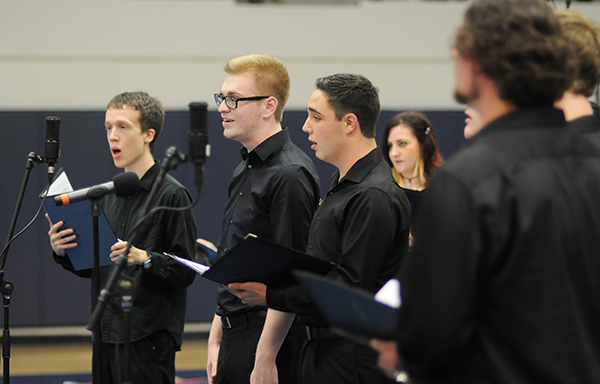 In the wake of cultural flux and social reform came the sacred concert piece, “Gospel Mass.”

Composed in 1979, it is a contemporary, English translation of the traditional Latin Catholic Mass. The Dalton State Singers will feature this piece at the group’s concert on Dec. 1 at 7:30 p.m. in Dalton State’s Goodroe Auditorium. The concert is free and open to the public.

The Dalton State Singers formed in January of this year and performed for the first time in April.

This semester’s concert will feature a wide range of musical selections, Burnette said.

One piece, “Make our Garden Grow,” is from Leonard Bernstein’s operetta, “Candide.” Burnette describes it as a “heartrendingly beautiful chorus of love and hope.”

“The haunting American Traditional Folksong was once shared by Canadians and Americans seeking their fortunes along the fur trade route,” he said. “It’s an Australian piece of choral music that is both innovative and eccentric. It is a popular love song that has made a notable appearance in almost every decade since the 1950s.”

Other selections include “When I Fall in Love” and “Shenandoah.” To conclude the program, there will be a holiday sing-along.