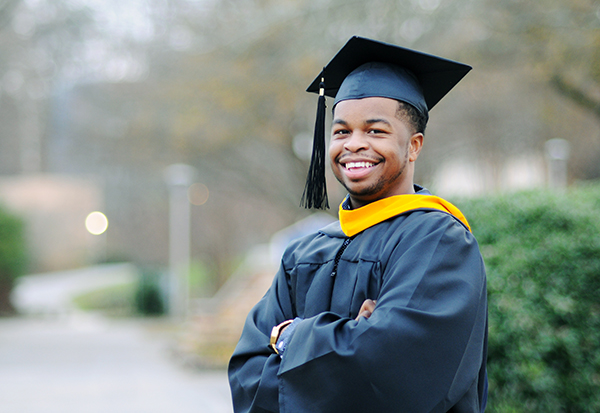 The 25-year-old Dalton State student has learned his life is about the journey and the impact he can make while traveling whatever road he may cross.

Even though Smith graduates Thursday with a bachelor’s in interdisciplinary studies, he isn’t sure what his next step is.

“I’m going to make a positive impact no matter what I do,” he said. “Whether I go on to mentor to kids or drive a truck, I’m going to do it and it will be a positive experience.”

It’s the kind of young man he has become. Dalton State has helped him solidify his outlook, but it began at home with a supportive, close family.

“He’s a fixture on campus,” said Jerry Drye, associate professor of communication who had Smith for two classes. “He is one of the most pleasant young men you will ever be around. He tries to encourage other students to get plugged in. He has the heart and desire to help others and encourage others. Everyone responds in a positive way to Larry. His joy and vitality will take him a long way.”

His love of sports began at a young age. The unity, brotherhood, and teammates coming together to accomplish a single goal drew him in and kept him involved.

Smith grew up in St. Louis, went to high school in Illinois, and returned to St. Louis for college where he was a track star. Unfortunately, the college he was attending cut athletic programs. He made the choice to continue pursuing track and transferred to a college in Iowa.

“Everything about being in Iowa was not for me,” he said. “I was in Iowa for two years and I was miserable every semester, even though track was going well.” 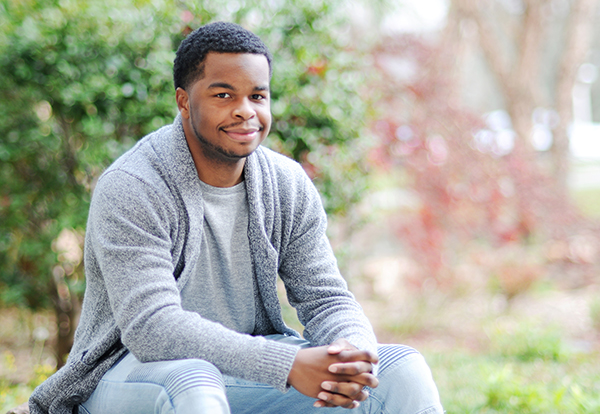 On top of that, Smith’s father, Larry Smith Sr., had thymus cancer. And Smith was concerned about being far away from the man he so admired.

It was 2012, around 2 one morning as the track team returned to campus after a meet, Smith believes God called him to return home to his family. He got in his vehicle and drove through the early morning hours back to St. Louis where his family lived at the time.

“I came in and laid on the couch,” Smith said. “My mom woke me up and said it was time to go speak to my father one last time. He was unconscious but I had a nice conversation with him. I held his hand as I watched him take his last breath. He was pronounced dead at 10:53 that morning, just a couple of hours after I had gotten home. I had seen him suffer for a long time. It was rough. The conversations I had had with him were some of the greatest. I was blessed to have him for the time I did.

“Earlier in his illness we’d had the death talk. He’d told me there would be some tough times but I was going to get through it. I was brought up to embrace changes in my life.”

The senior Smith, a veteran of the Vietnam War, had taught his son the importance of higher education. He was a semester away from graduating Morehouse College in Atlanta with a degree in pre-med when he decided to become a pilot. He was succeeding, but wanted to fly instead of practice medicine.

The younger Smith said his now deceased grandmother, Catherine Gary, was also a huge influence on his life. She had also gone to college in Mississippi and reinforced the importance of higher education.

But they also taught Smith how to follow God’s path in life.

So when Smith came to Georgia to bury his father at the National Cemetery in Canton and he saw the bell tower on Dalton State’s campus as he passed by on I-75, he was intrigued. He knew it was time to leave Iowa, and coming to his father’s home state – a place that meant so much to him he wanted to be buried there – appealed to him.

Dalton State didn’t have athletics at the time, but Smith made the decision to give up being a student athlete and transfer. 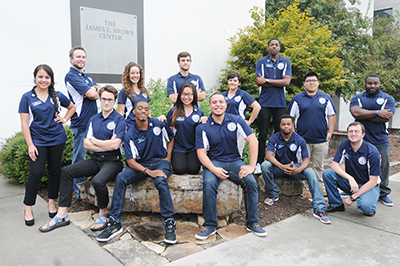 “It has changed my outlook on life,” Smith said. “The College is so diverse. We care about each other. Students care about each other here. They want you to succeed. The staff and faculty want you to succeed. Every teacher has my best interest at heart. I didn’t know what I was capable of until I got here. I was just getting by as a student athlete, but here they make me work hard every day. They make me apply myself.”

“At first he was struggling,” she said. “My classes are strict. But he engaged in classes. He thinks differently. He has opened his mind and is certainly one that will speak up.”

Garrett Burgner, director of Campus Recreation, was impressed with Smith immediately, but has seen how he has become a student leader over the last couple of years. Burgner is Smith’s boss, but the two have also become friends.

“He has an authoritative presence,” Burgner said. “I saw how students would go to him for advice. He is very responsible. He takes care of all the scheduling and everything for intramurals. He goes above and beyond what I require of him. I’d love to keep him here as long as possible. But he’s starting to see life after college.”

Burgner has been a role model and a mentor to Smith. 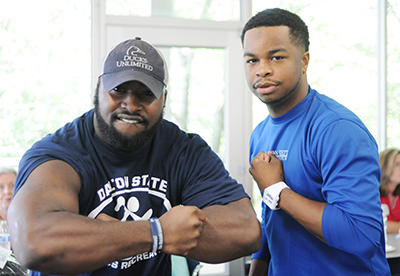 Smith isn’t worried that he doesn’t have a plan right now.