Observatory Should be Complete This Year 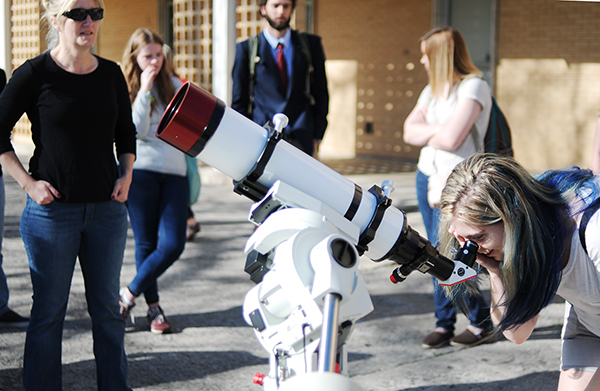 After being stalled for a few months, plans for an observatory are moving forward again.

On Monday night, a contract was signed by the Whitfield County School System to allow Dalton State to build an observatory on property at Beaverdale Elementary. The observatory will be just off Ga. Highway 2, an ideal place because it’s away from much light pollution, said Dr. Randall Griffus, dean of the School of Science, Technology, and Mathematics.

The observatory will house a 24-inch, reflecting telescope, made possible by a $300,000 grant from the Mashburn Charitable Trust. It could constructed and in place by the end of the year, Griffus said.

Griffus and Dr. Samantha Blair, assistant professor of physics and astronomy, have looked at several different locations in Whitfield County for the observatory. Plans were to construct it in the Westside Community adjacent to the old Westside landfill but had to be discontinued due to problems with methane released as materials decompose, Griffus said.

“The location at Beaverdale will allow astronomy students to take photographs and view objects in deep space,” Griffus said. “A local astronomy society has helped us measure light pollution and it is very low, meaning more visibility.”

Images will be sent from the observatory back to campus for research, eliminating the need for students to actually visit the observatory. This will allow more opportunities for student research in the areas of other galaxies, nebulas, asteroids, supernovas, and possibly planets outside of this solar system, Blair said.

With the addition of the observatory and newly acquired telescopes, the astronomy classes at Dalton State will become lab sciences.