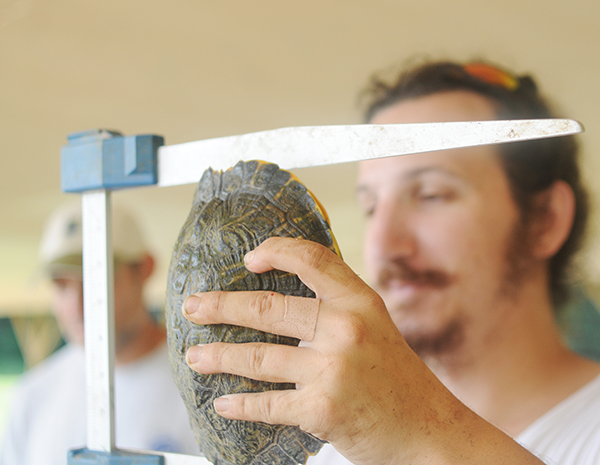 After five years of turtle surveys at Lakeshore Park, researchers believe they have enough data to begin making educated estimates of the turtle population there.

Dr. John Lugthart, professor of biology at Dalton State, and Chris Manis, a part-time instructor and research associate, have spent two weeks each summer capturing turtles, collecting data on them, and re-releasing them in their habitat. They are assisted by Dalton State students and alumni; some volunteer to help and some receive research credit for their work.

Dalton State is actively involved in restoration and conservation work at the park, which contains an urban wetland, ponds, springs, and a forested slope. Part of the College’s contribution is conducting animal and plant surveys in and around the wetland. Researchers will monitor the animal and plant life during and after restoration work is complete.

Turtles are given a unique marking on their shell when captured. It is similar to filing a human’s fingernails, and so it does not harm the animal in any way.

“We have had several recaptures this year, which will help in making an estimate of our population size before improvements are made here,” Manis said. “We’ll soon have an accurate metric to say with confidence ‘we have this many of this species living here.’ Once we have the population we can answer other questions about where they’re going and where they’re laying eggs.”

Recaptures also tell researchers about the turtle’s growth and health. 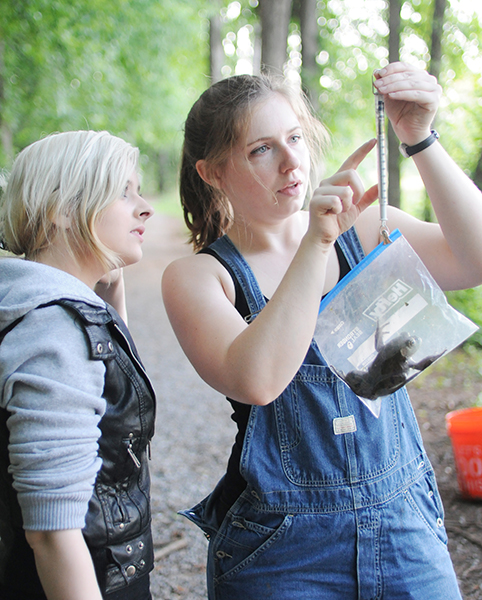 In the time since Dalton State has begun research at and around the wetland, the water level has risen, which is a good thing, said Lugthart.

“Beavers have moved back in, which helps in these urban wetlands,” he said. “Beavers are doing their job and increasing the wetland. They are assisting us with our restoration.”

The park is owned by the city of Dalton, and Lugthart is helping advise officials on restoration. Plans call to plant more trees along the banks, reconfigure bank slopes, and connect the existing ponds. The work should discourage the Canada geese, and encourage more native species. Plans also call for an additional pavilion and a renovation of the current pavilion.

“Having a place where people can come see a natural area in a city like Dalton is great,” he said. “It is a remarkably biodiverse area. There are numerous birds, turtles, fish, and several amphibians. Saving small places like this is important. Plus, we have the opportunity to provide nature education to our students at Dalton State, and Brookwood Elementary uses this space for education as well.”

In addition to the turtle survey, two Dalton State biology students, Tegan Hendricks and Daley Harrison, are researching the amphibian population. Their study began in the spring and should pick up again in the fall when it is not so hot and dry outside.

“Being able to do this research at this wetland has confirmed that I want to do field biology,” Hendricks said. “Amphibians are good indicators of the quality of the wetland because most of them breathe through their skin. They won’t be able to survive here if it is polluted, for example. Fish and amphibians are the first to go in a polluted area because water holds the pollutants.”

The team has been able to identify bullfrogs, green tree frogs, slimy salamanders, and bronze frogs. Other amphibians have been heard, but not yet captured.

Dalton State student Susan Tinch has been working to identify birds and plant life in and around the wetlands. A bird survey conducted in 2011, revealed 19 species used the wetlands for breeding. In 2015, after some of the restoration work had begun, that number was up to 24.

“It will be interesting to see how many more species use this park once all the restoration efforts have been put in place,” Lugthart said.