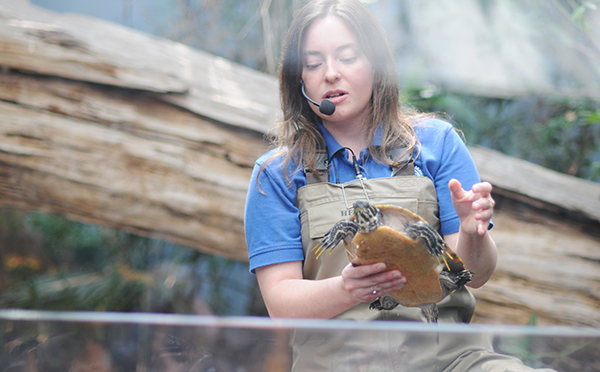 MacKenzie Mathis had plans to be a marine biologist.

But then she met the freshwater turtles at Lakeshore Park while assisting Dalton State with research and realized her future wasn’t in marine biology.

It was in herpetology.

Mathis, who graduated from Dalton State in the fall of 2014 with a bachelor’s degree in biology, now works at the Tennessee Aquarium in Chattanooga, Tenn., where she cares for nearly 200 reptiles and amphibians. Animals under her care include the anaconda, the dwarf crocodile, the alligator snapping turtles, chameleons, and frogs.

Her experience at the College – both in class and doing undergraduate research - prepared her for this job. It prepared her to take care of animals and to educate the public on them.

“People don’t give reptiles enough credit,” she said. “They’re smart and have their own personalities. I knew from a young age I was going to go into biology. Reptiles stole my heart.

“I love caring for animals. I think conservation efforts and public education are important. So many people don’t know about animals locally or internationally, and our exhibits educate people on both, as well as human impact on the environment.” 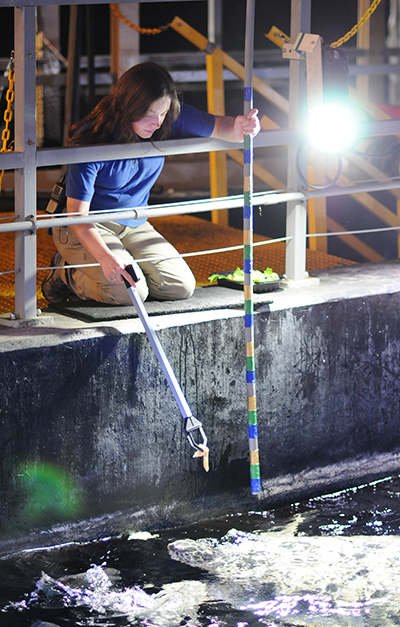 Mathis worked as an intern for the aquarium for approximately a year and has been an animal care specialist there for a few months. In addition to being responsible for the general care of reptiles and amphibians, Mathis leads educational programs for aquarium visitors.

Chris Manis, part-time instructor in natural sciences and research associate at Dalton State, helped Mathis secure her internship at the aquarium. He oversees the College’s Turtle Assurance Colony and helps with the Lakeshore wetland data collection. Mathis worked on both those projects.

“Once MacKenzie learned how to do something you didn’t have to tell her again,” he said. “She learned so quickly. We never had to double check her work. She found her passion. We watched it grow. Even after she graduated she came back to help us with the turtle data at Lakeshore. When she graduated, I emailed a friend of mine and told him how good she was and if they had an opening they should consider her. She didn’t disappoint.

“Her independent, curious, responsible character helped her move from intern to a full-time employee. She caught on quickly. I had zero hesitation recommending her. She soaks in information.”

Mathis was in Dr. Kim Hays’ field biology techniques course one summer when she met Manis. That course was also the reason she became involved with the turtle projects at the College. The class visited Lakeshore to learn about capturing, collecting data, and re-releasing turtles.

“Then she just never left,” Manis said. “She helped us collect turtle data, and she was so good. She offered to come back and help as often as she could. She helped us with the Turtle Assurance Colony. She was so good at what she did we kept asking her back. It’s hugely rewarding to see her at the aquarium in her field as an expert.”

With the Turtle Assurance Colony, Mathis learned how to care for several different species of endangered turtles. There is some overlap between the species at the College and those at the aquarium, as both are part of the Turtle Survival Alliance, geared toward saving species from extinction by encouraging reproduction.

“I’m grateful to Chris,” Mathis said. “He helped me get my internship here, and he really encouraged me to do herpetology. I got so much hands-on experience that helped prepare me for this job. I learned how to handle animals and how to care for them. I started caring for turtles my last semester at Dalton State, and I did it for the love of the turtles. I never got class credit for it.” 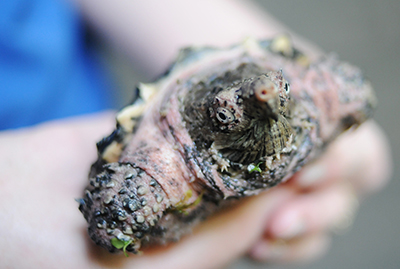 Mathis also worked with Hays on a small mammal diversity study on campus and on the hiking trails near campus. It is a project for which she was able to receive research credit.

“She was a very quiet student, and I didn’t have to tell her anything twice,” Hays said. “She wasn’t afraid to ask questions. It was nice for her to be my first research student. She didn’t need me to stand there with her telling her every little thing. We work so closely with our students here. We get to know them well enough to work on their strengths and work on strengthening their weaknesses to help them meet the professional goals they’ve set for themselves.”

“I never know what people at the aquarium will ask me about the species,” Mathis said. “It’s interesting. But I have to know facts about the animals off the top of my head. I love that I know so much about so many different species now.”

Though Mathis left her original dream of marine biology for freshwater turtles, part of her job requires she care for two rescued green sea turtles. She leaves the building housing the freshwater tank and heads to the building that houses the saltwater tank where the two turtles skim the top of the water waiting to be fed.

One turtle was hit by a boat before going to live at the aquarium. It is missing parts of the back of its body, including its tail. Each turtle knows where to go to be fed because of different taps on the side of the tank with a pole.

Then Mathis must head back to the freshwater tank where she will don waders so she can walk down into the Delta exhibit to give a short presentation and answer questions about the animals living there. She talks about the many species of turtles, as well as some of the birds in that exhibit. 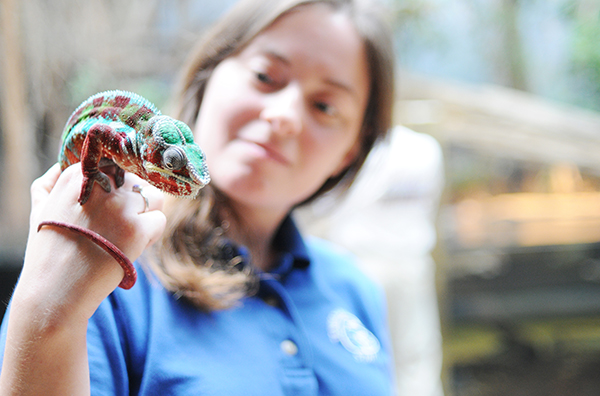 She cares for a chameleon. There are snakes in enclosures stacked in her office, each with a different temperament.

“I eventually want to continue my formal education,” Mathis said. “But right now I’m where I belong. It’s great to work here. It is truly a dream job. I love that the professors at Dalton State work so one on one with you. I’m thankful for my relationship with them.”