Professor Leaves Behind a Legacy of Love and a ‘Funasium’ 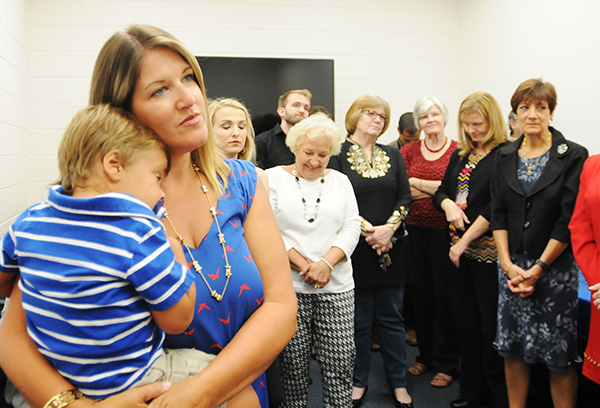 That was Barton’s sense of humor.

Barton, who was the chair of the Department of Communication, died unexpectedly in May of this year. On Tuesday, that conference room he joked should be named for him, was dedicated to his memory.

“He was an amazing chair of this department,” said Jerry Drye, a friend of Barton’s and an associate professor of communication. “I often gave him advice over free pie on Wednesdays at O’Charley’s. He often didn’t take it. He asked me how to spell funasium, and I told him he made up the word so he could spell it any way he liked. So for the record, that’s one ‘n’ and no hyphen in funasium.

“His legacy will continue to be an influence on everyone at Dalton State.”

“He was a shining star,” she said. “I didn’t know him long, but I knew he was a standout. His legacy was love. He loved people, and people loved him.”

That was evident in the number of people who attended the brief dedication ceremony. Colleagues, friends, and his family members, including wife Gina and 2-year-old son Wyatt, crowded in the conference room and spilled into the hallway as people shared memories of Barton. 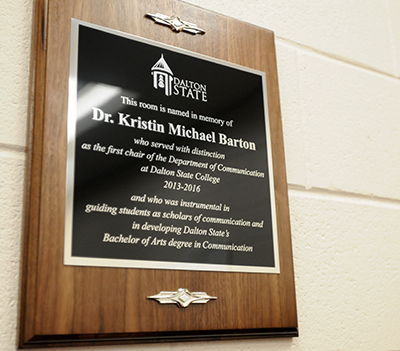 “We inexplicably lost an inspiring teacher, a dear friend, a loved one, and an irreplaceable colleague,” said Dr. Mary Nielsen, dean of the School of Liberal Arts. “It is fitting that we come together today to name the communication conference room in Dr. Barton’s memory. In the last five years, he assisted more than 15 students as they presented at state, regional, and national conferences and some of these students went on to publish in refereed journals. He was an extraordinary scholar and author of at least 47 presentations, articles, and books in his short time with us. He was a pioneer in establishing undergraduate research at Dalton State.”

Dr. Barbara Tucker, who is now serving as the chair of the Department of Communication, said Barton was one of the first professors on campus to encourage undergraduate research. He organized trivia fundraisers to send students to conferences, and he was working with students to publish a trivia book about Dalton State at the time of his death. In addition, Barton was a writer who encouraged others to write, and his commitment to a quality product was evident, she said.

“I am so proud of his accomplishments,” Gina Barton said. “I feel so honored the school wanted to dedicate this room to his memory. Kris was so dedicated to his job here. We have received so much support from everyone at the College. He would have been so grateful for that support.”