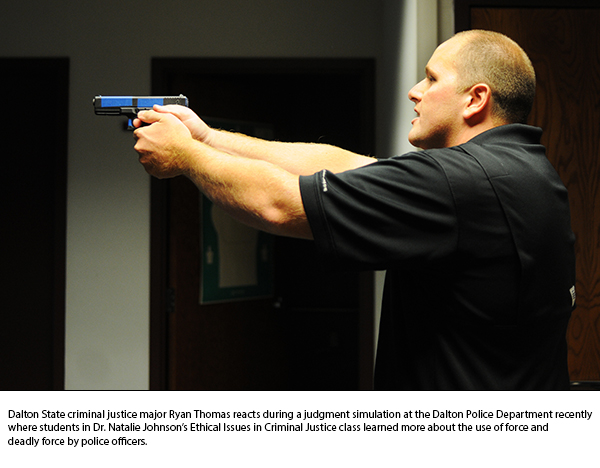 When Ryan Thomas first walked into the Dalton Police Department’s judgment simulation, he thought it might be silly.

But the experience and the lessons he learned were far from that.

“It’s like I had tunnel vision,” said Thomas, a criminal justice major at Dalton State with aspirations to go into local law enforcement. “Even though it was a simulation, I was willing to do whatever I needed to to save my life and the lives of others.”

Students in Dr. Natalie Johnson’s Ethical Issues in Criminal Justice class visited the police department to learn more about the use of force and when deadly force is warranted and lawful. Each student went through the simulation alone, and officers debriefed them as a group once everyone had completed the tasks.

“I wanted them to realize and experience for themselves what it would be like to be in a situation where they had to decide in a split second whether or not to use deadly force,” Johnson said. “This exercise clearly demonstrated to students it’s much easier said than done.”

No one in the class survived one of the simulations, in which a man exited his vehicle with a gun to his temple. There were red flags, but no definite forewarning the man would turn the gun on an officer until it was too late.

“It was intense,” Thomas said. “There’s such a negative connotation in law enforcement right now. When I was a kid, police officers were heroes. But now, your life can be ruined as an officer even for doing something within your legal right trying to make sure everyone is safe.” 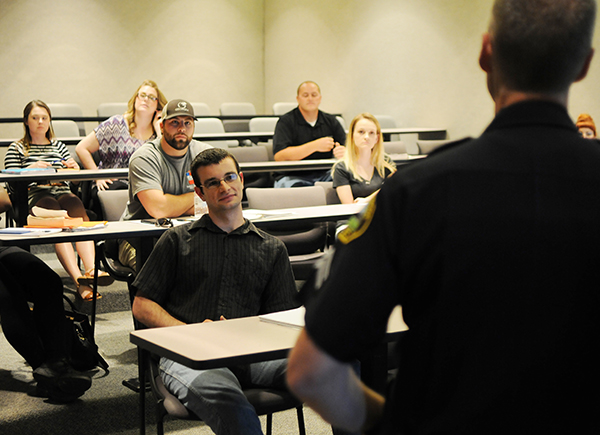 “I want to make it clear that you can simultaneously support the police while being against police brutality,” she said. “There are clear cut cases of police brutality and unlawful use of deadly force, and we study those cases closely in class. However, often times the videos you see in the media are just clips and don’t show the totality of circumstances, nor is all the information in the video even visible. It’s easy to sit back and judge an officer’s actions in a safe and sterile environment with no immediate threat to your life. It is important to understand that we weren’t there, and we did not see or perceive what the officer saw or perceived. A clip in the media is not the same as knowing what the officer experienced.

“Using the simulator gave students firsthand experience in demonstrating that making that judgment call isn’t as easy as it looks. This exercise helped them think critically and gather all the facts before coming to a conclusion regarding police use of deadly force.”

One of the simulations led students through a scenario where they were responding to a domestic violence emergency call. A man fled with a hammer, which he had used as a weapon. The simulation leads them to a confrontation with the man.

Police Chief Jason Parker says he is glad to speak with groups from the College, as well as the community, about these topics.

“It’s helpful for them to see real world examples,” Parker said. “Speaking to groups gives them an opportunity to hear how important it is to have integrity when you’re an officer.”