Margaret Venable to Be Inaugurated as Dalton State’s Fifth President 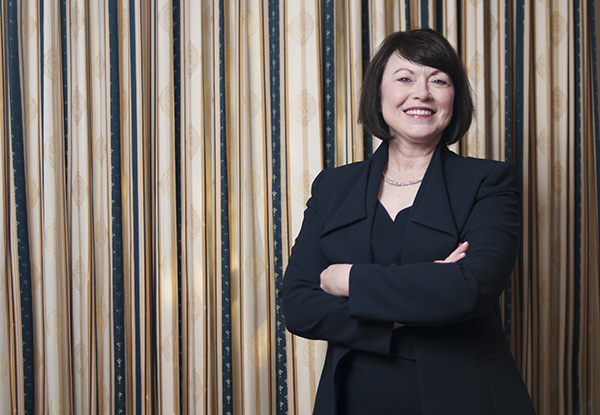 The public is invited to attend a special ceremony in the history of Dalton State College where Dr. Margaret Venable will officially be inaugurated as the fifth president of the College.

During the ceremony on Friday, Oct. 21, at 2 p.m. at the Burran Bell Tower Quadrangle, Hank Huckaby, chancellor of the University System of Georgia, will place the presidential medallion around Venable’s neck officially investing the power of the presidency in her. She will also speak on Dalton State’s history and future in her inaugural address.

Since being appointed president in September of 2015, Venable has shared her vision of making Dalton State a first-choice destination college while keeping tuition affordable.

“I am glad to be at an institution where I can make a difference in the lives of the students,” said Venable, who has nearly 30 years’ experience in the University System of Georgia. “That’s my favorite thing about working on a college campus, getting to know the students. I am humbled and honored to be chosen. There is no other college I’d rather be president of.”

The inauguration and investiture ceremony will be the culmination of a week of special events highlighting culture, service, scholarship, and sport at Dalton State, said Lee Ann Nimmons, professor of mathematics and chair of the Celebrations Committee that is planning inauguration activities.

“It was important to Dr. Venable that we use the occasion of the inauguration to shine a spotlight on the College and the depth of programming offered here,” Nimmons said.

Inauguration week activities are all free and open to the public.

The week’s events begin with a campus community concert on Monday, Oct. 17. Members of the campus community –students, faculty, and staff-- will share their musical talents at 7:30 p.m. in the Goodroe Auditorium.

On Tuesday, Oct. 18, members of the faculty, staff, and students will give back to the campus and community with a day of service. Acts of service range from reading to area school kids, to planting seedlings on the Roadrunner Trail System, to student nurses supplementing the work of hospital nurses, to sprucing up the campus for Friday’s big event.

A student research showcase is planned for Wednesday, Oct. 19 from 5:30 to 7:30 p.m. in Peeples Hall. A total of 21 Dalton State students will share findings from their undergraduate research projects in oral and poster presentations.

Also on Oct. 19 is an open house on campus. This is an opportunity for the community to visit newly opened and renovated buildings including, Peeples Hall, Pope Student Center, Mashburn Hall, and the Health Professions Building. Tours given by the Roadrunner Student Ambassadors will leave from the bell tower every 30 minutes between 5 and 7:00 p.m. There will also be a grand opening of the Health Professions Building at 4 p.m. in the main lobby. Among the featured spaces in that building are the College’s first ever Student Health Center and a trauma simulation lab.

Faculty representatives will debate the value and relevance of each of their academic disciplines in a Save Our Civilization Panel: 2055 on Oct. Thursday, 20 at 6 p.m. in the Goodroe Auditorium. Humorist Jerry Drye will moderate the lighthearted, good-natured discussion which revolves around a future civilization and need for funding the newly found planet Daltonia. Faculty members participating in the panel discussion will be Matt Hipps representing the School of Liberal Arts, Ben Laughter for the School of Business, Robert Overstreet from the School of Education, Robin Cleeland representing the School of Health Professions, and Gene Mesco for the School of Science, Technology, and Mathematics. Marjorie Yambor of the Department of Communication will serve as the science reporter describing the discovery of the new planet.

In addition to the inauguration and investiture ceremony at 2 p.m. on Friday, Oct. 21 there will be a women’s volleyball game against William Carey University at 7 p.m. in Bandy Gymnasium.

Inauguration week kicks off the College’s 50th anniversary year. More events will be planned throughout the year.

For more on the inauguration and to see videos of Dalton State’s presidents, click here.