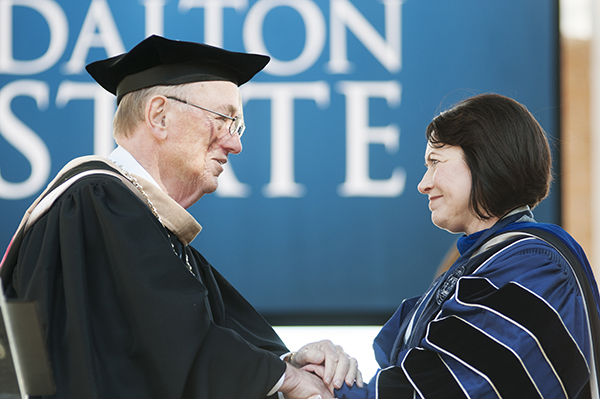 On a beautiful autumn afternoon Dr. Margaret Venable received the presidential medallion investing in her the power of the presidency of Dalton State College and committed to creating a first-choice destination college where students will want to attend, stay, and graduate.

In addition to the medallion, Venable was also presented with a key to the city and the happy news of a chemistry scholarship created in her honor before a capacity crowd at the Burran Bell Tower and Quadrangle of Dalton State.

“I stand before you as the president of Dalton State College and I feel as if I have won the lottery,” she said.

Her inaugural address was preceded by greetings and salutations from representatives of several constituent groups, including Student Government President Max England, who said it was his initial intention to attend Dalton State for the first two years of his college career before transferring elsewhere.

“I thought, ‘Why would I want to graduate from Dalton State? There isn’t really anything for me to do or accomplish here,’” England said. “But in my three years here I have made many friends and professional connections. I’m involved in seven clubs here at this school which invigorates hundreds of students. Without Dalton State I wouldn’t have been able to speak about the accomplishments I have achieved or the wealth of opportunities that have been offered to every student that walks onto our campus. 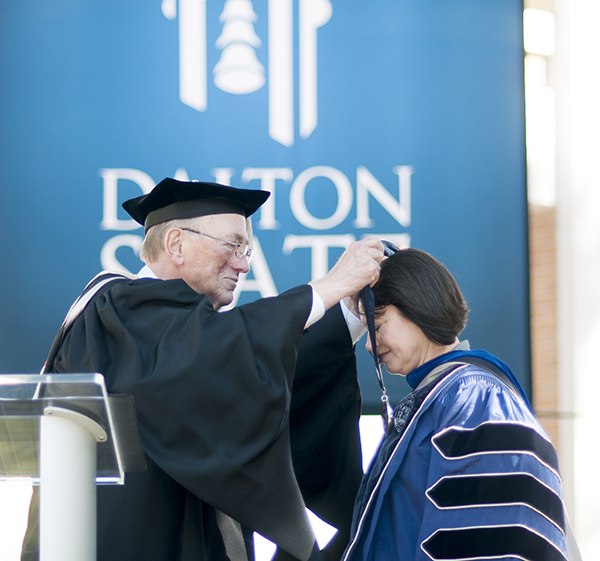 “Under Dr. Venable, Dalton State will continue to progress into the future as a top tier institution that will prepare all of our graduates to be competent and successful employees around the world,” he continued.

Venable is student-focused, taking time to speak with the students and know them on a personal level.

“I only have positive things to say about her,” England said. “She has always been very approachable. When I was elected SGA president she made it known where she wanted the College to go and what her vision for the students and Dalton State could look like. She’s accomplishing that vision.”

Venable, who served as interim president for nine months before being named Dalton State’s permanent president a year ago, said that it was her early work experience growing up in small town Kentucky that taught her self-discipline, work ethic, and the value of a dollar, but also that she needed an education to obtain the kind of career that would fulfill her.

She shared that her hope for the students of Dalton State is the same as her hopes and dreams for her own son, Quentin, a freshman at Georgia Tech, “to become lifelong learners and active leaders and to make positive contributions in our community.

“Our students inspire me daily,” she said. “When Quentin has had more than he can stand of his mother, I have more than 5,000 other sons and daughters whom I can smother with my helpful guidance and attention.”

Presiding over the inauguration ceremony was Hank Huckaby, chancellor of the University System of Georgia, who noted that Venable’s inauguration would be his last before he retires at the end of December. He expressed confidence in Dalton State’s future under Venable’s leadership.

“I believe no one is better suited for the job than Dr. Venable. She is the right leader at the right time for this college,” Huckaby continued. “For the past nearly two years, Dr. Venable has served as an active leader on the Dalton State campus and surrounding community. During this period, I’ve been particularly pleased with Dr. Venable’s focus on academic success, community engagement, as well as interest and support of the faculty and students, all which serve to enhance the institution and the educational opportunities for the residents of Northwest Georgia. I am encouraged by her commitment to Dalton State’s access mission and her vision of making Dalton State a first-choice destination college while keeping tuition affordable.

“Dr. Venable is making a difference in the lives of students by engaging with them on campus,” he said. “Ask students and faculty alike, and they will tell you, Dr. Venable has a tangible energy that is inspiring. She is absolutely committed to this institution and to this community. She puts 100 percent of her energy into improving conditions for this college and community.

Vance Bell, CEO of Shaw Industries and Chair of the Dalton State Foundation Board of Trustees, surprised the College president with the announcement of the Margaret H. Venable Scholarship in Chemistry that has been endowed by friends and colleagues of Venable. 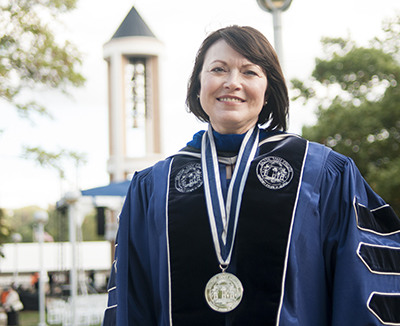 “Dr. Venable’s own professional background in chemistry, combined with her commitment to students and making college affordable for them, made this a natural thing for us to do in commemoration of her inauguration as Dalton State’s fifth president,” he said. “The Dalton State Foundation is proud of your gifts of service and talent for the good of Dalton State, and we pledge our steadfast commitment to you as we build Dalton State into a first-choice destination campus.”

In her inaugural address Venable paid homage to the College’s first four presidents: the late Dr. Arthur Gignilliat, the late Dr. Derrell Roberts whose widow, Leta Faye attended Friday’s ceremonies, as well as Dr. James Burran who attended with wife, Sally, and Dr. John Schwenn who was joined by wife, Judy for the foundations they laid and upon which she hopes to build.

“My hope is that when the sixth president of this college is inaugurated, we will reflect on the progress made during the Venable era and agree that, by working in unison toward goals we established together, we improved the economic vitality and quality of life in Northwest Georgia through helping students earn valuable college degrees at one of the most affordable colleges in the nation,” she said.