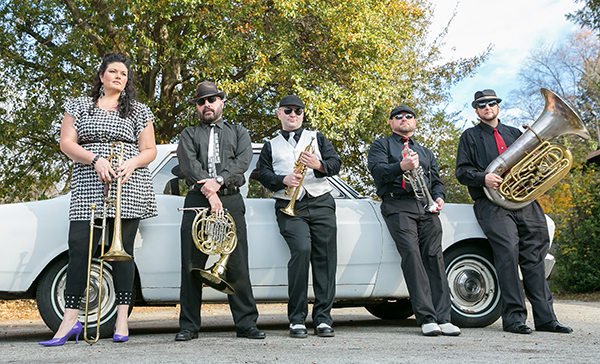 Dalton State continues the fall concert series with a night of music exploring personal stories of New York that lead the listener through a menagerie of composers and pieces.

The Midtown Brass Quintet will perform, “Brass Menagerie,” a free concert at the First Presbyterian Church of Dalton on Sunday, Nov. 6 at 3 p.m. The concert will feature music from composers such as Leonard Bernstein and George Gershwin.

“This should be a great concert,” said Dr. Ellie Jenkins, who organizes the concerts on campus. “The quintet is composed of terrific musicians with many years of experience. They’ll be performing some great pieces of music by some of America’s best composers.”

Poovey received his musical training at UNC-Greensboro and the University of Missouri. He has held the Principal Cornet position with the award-winning Georgia Brass Band since 2002, where he is frequently featured as a soloist.

Lawing-Pritchard graduated from Georgia State University and has studied at the Cleveland Institute of Music.  As a performer, Hollie has played with the Atlanta Symphony Orchestra as well as the Columbus, Augusta, Cobb, Carroll, Youngstown, and Warren symphony orchestras, among others.

Pritchard is a native of New Jersey. He began teaching and performing in Atlanta in 2001 while he was a member of the Army Ground Forces Band. Currently he plays tuba with the Midtown Brass Quintet, the Georgia Brass Band, the New Atlanta Philharmonic, the John's Creek Symphony Orchestra, and the Ludwig Symphony.

Sunday’s concert is made possible by a grant from the Dalton State Foundation to the School of Liberal Arts and is open to the public.