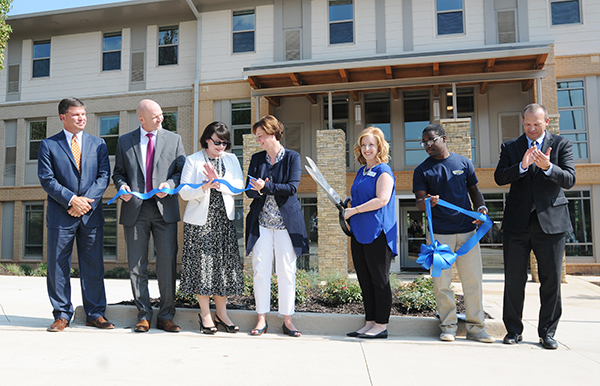 Natalie Bates was a “mama bear” to students at Dalton State’s campus.

She stood up for them. She encouraged them to work hard in their classes. She told them when they had done something wrong and helped them correct it.

Bates, 32, took students in and treated them as her own family members.

And that’s what current and former students have focused on since hearing of Bates’ death over the weekend. She had been fighting leukemia.

Bates began at Dalton State as the director of residential life in 2013. On-campus housing at that time consisted of the Wood Valley apartment buildings. She was instrumental in the design and construction of Mashburn Hall, much of it through her illness.

“Natalie Bates’ presence will be deeply missed at Dalton State,” said Dr. Jodi Johnson, vice president for student affairs and enrollment management. “We are grieving for our colleague and our friend. Mashburn Hall will stand as a legacy for Natalie, and a testament to her desire to provide the very best living and learning experience for Dalton State students. She worked tirelessly on the project from the beginning planning phases through the ribbon cutting and grand opening in July. Natalie reveled in the smallest design details, and I will forever be grateful she was able to see the project finished. Perhaps even more than the physical building she leaves behind, Natalie leaves a sense of community for our current and future students. She was instrumental in starting the Bird Feeder food pantry on our campus so no student would go hungry, she worked tirelessly to develop student leaders, and she never passed on an opportunity to laugh with students and make lasting memories.”

In the summer of 2015 residential life lost assistant director Jason Ramos in a car wreck. Bates was a calm and comforting voice as students grieved his death.

“Natalie carried herself with a lot of class and dignity,” said Russell Smith, a 2015 graduate of Dalton State, who served as head resident assistant his senior year. “She was someone really worthy of respect, and she knew how to have fun. She was like the mama bear. She liked that about herself. Jason was prankster and Natalie was protective mama bear and took care of all of us.”

As Smith realized he wanted to continue his education and work at a college in residential life for a career, Bates answered his questions, wrote letters of recommendation, and gave him unending support.

“She took me under her wing and started giving me opportunities to build my skills so I could one day work in housing as a professional staff member,” Smith said. “She really encouraged me to establish some balance in my life as well. I had taken on so many leadership roles at Dalton State I was experiencing some burnout. She encouraged me to find time to recharge and think about what that would be like for me.”

Smith is currently in his second year of a master’s program at the University of Alabama, which is where Bates earned her master’s. Even though Smith had graduated from Dalton State, he still kept in touch with Bates and went to her for encouragement and support.

“I never questioned how Natalie cared for us,” he said. “She treated everyone like family. We were part of a family. We’re really going to miss her.”

Drew Serrette, who worked under Bates as a resident assistant and is expected to graduate in the spring, didn’t hesitate to go to her anytime he needed a mother’s wisdom and understanding.

Living away from his parents means he doesn’t have someone physically there with him when he needed that, and Bates filled that role for him.

“I struggled,” Serrette said. “She would have ‘come to Jesus’ meetings with you if you weren’t doing well in a class. That pushed me along. We had a discussion about me becoming an RA, and she said I had to get my act together. That put me on the road to success from there. I’d tell her I want to give up and she’d tell me no and keep pushing. Every once in a while I need that. Having someone that can become that motherly figure away from home is helpful. Before Jason’s death, I thought of him as a dad figure, and Natalie as a mom figure. They gave me the male RA of the Year Award one year. I see Jason’s and Natalie’s faces in that award. I know they’re right there pushing me to graduate.”

Matthew McCarthy-Clark first met Bates in 2011 when the two worked together at Berry College. She originally didn’t want him working under her, joking it was because she was a coffee enthusiast and he wasn’t.

The two became known as “Frick and Frack” at Berry’s campus, organizing flash mobs during the freshman convocation, showcasing the evolution of dance at a staff talent show, and coaching students to win Ms. Berry.

When Bates left Berry in 2013 for Dalton State, and McCarthy-Clark for the University of Tennessee, he thought the two wouldn’t work together again.

“But she recruited me back down – out of housing retirement – to work with her after the loss of Jason,” McCarthy-Clark said. “The dynamic duo of ‘Frick and Frack’ were reunited again. We were back up to the old antics of dressing up every day for Freak Week, and creating our Sweater Spectacular program to rolling out ‘Flashback Field Trip’ where we got to dress like kids, eat sack lunches, and take a trip to the Tennessee Aquarium.

“She always had a zest for life and made an impact on every student, faculty or staff member she spoke with. From working at Berry and being lucky enough to work with her a second time, she quickly became my best friend and stood up with me at my wedding this past September. I am glad that she was able to see Mashburn finished, one of the projects that she dedicated her time to since working at Dalton State, and bringing life to this department and Dalton State’s residential life program.”

Roadrunner Nation is better because of Bates’, said Dr. Margaret Venable, president of the College.

“Natalie has touched countless lives in her short lifetime,” she said. “We are all better for having known her and her legacy will live on through each of us who knew her.”

“Natalie’s absence will be a loss for the institution, especially residential life,” said Dr. Jami Hall, dean of students. “She was a powerhouse down there, as she always kept things running in perfect order. I hate to know her life was taken so early.”

But Bates’ impact doesn’t end at the College. She was involved in the community, and loved Dalton.

“In 2015, I was thrilled that Dalton State nominated her to be in the Leadership Dalton-Whitfield program class of 2016,” said Phyllis Stephens, chief operating officer of the Greater Dalton Chamber of Commerce. “Her beautiful smile lit up every room she walked into during the Leadership Dalton-Whitfield program. She truly cared about the community and as she learned more about Dalton and Whitfield County through the LDW program, she shared information with Dalton State student leaders. She was a young professional who truly cared about the community, she shared what she learned, and she encouraged Dalton State College students to also care and give back.”

Bates leaves behind husband Nathan and daughters Addie Kay and Annie. The funeral service is Tuesday at 11 a.m. at Tunnel Hill Baptist Church. Visitation is at the Rocky Face Chapel of Peeples Funeral Home from 5 to 9 p.m. Monday.