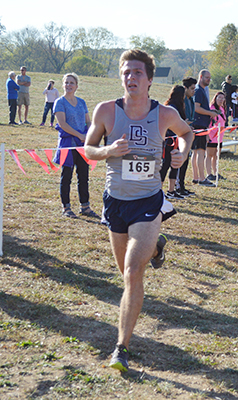 Cole Thornton is only a sophomore but he’s pulling ahead as a role model in athletics and in the classroom.

“Cole is an extremely hard worker academically and athletically,” said his coach, Margie Bruner. “He realizes how important his efforts are in being successful. He is a great example to all our runners.”

To be eligible for this honor, students must be at least a sophomore, have a GPA of 3.5 or higher, and must have participated in at least 50 percent of the competitions.

Thornton has a 3.9 GPA and has been named as one of 12 athletes to the 2016 SSAC All-Academic Team. In addition, he had a season-best time of 26:26 at the NCAA-II Sand Shark Invitational, and he finished in 27th place in the SSAC Championship with a time of 29:59.