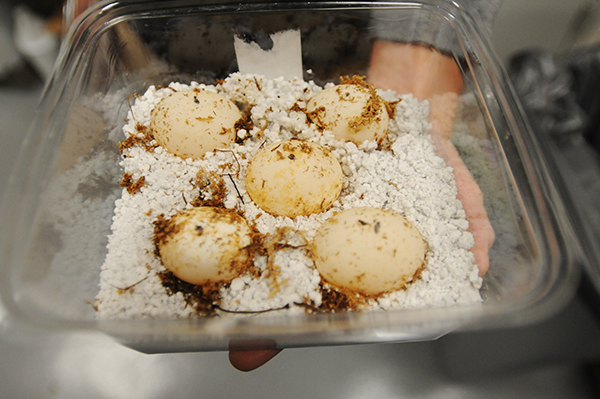 Love is in the air at Dalton State’s Turtle Assurance Colony where parents of the first endangered turtles to hatch at the College have been at it again.

The female Home’s Hingeback Tortoise (Kinixys homeana) laid five eggs last week. Chris Manis, part-time instructor in natural sciences and research associate who oversees the colony says there’s no way to tell if each egg will hatch a turtle, but he’s hopeful. The exterior of the eggs look healthy.

Over the next few weeks, Manis will monitor the eggs looking for bands to form, which would indicate egg viability. The eggs are housed in an incubator in Peeples Hall; it will take approximately two months for the turtles to hatch.

Dalton State is a member of the Turtle Survival Alliance, a conservation group formed in response to the disappearance of turtles in Asia where they are sought for food. Members of the TSA try to encourage breeding of endangered turtle species from different regions around the world. The College’s colony is approaching its first anniversary.

Hingebacks, a species native to central Africa, are rarely bred successfully in captivity, Manis said. But these two mates have already produced three healthy turtles, which hatched in June.

When the turtles reach sexual maturity they will be traded to other members of the TSA to ensure a deep gene pool.

Dalton State could be an important contributor in saving endangered species, Manis said. The College is home to several different endangered turtle species. Manis, and other faculty, staff, alumni, and current students, help to care for the reptiles.