‘A Great Fit for Dalton State:’ Deshawn Ruffin Shines on and off Basketball Court 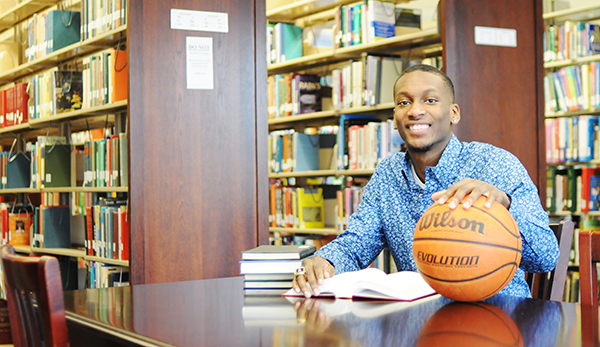 Deshawn Ruffin grew up hearing the advice “you can only stand on a basketball without falling off for a short period of time, but you can stand on paper, a diploma, forever.”

His father’s words stay with him. Basketball isn’t all the 6-foot point guard for Dalton State is relying on for success.

Ruffin, a 19-year-old sophomore from Jacksonville, Fla. studying business management, puts just as much work into his academics as he does his athletics. He’s the one on the bus with the light on reading while the team is traveling back to campus late at night from a game. He’s the one that stays in the library longer than the team’s required hours.

“I felt like I wasn’t always the smartest, but I learned how to work harder,” said Ruffin, who has a cumulative GPA of 3.5. “So in basketball, I may not be the most talented or the tallest, but I can outwork anyone.”

Ruffin’s work ethic is obvious both on and off the court. The word “special” is often used to describe him.

Accounting wasn’t his favorite subject, but he knew it was a skill he needed to learn. He approached Jamie Connors, assistant professor of accounting, to ask for more work in her principles of accounting class. 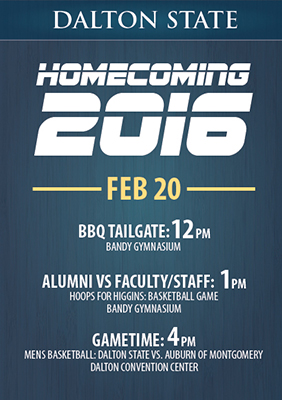 “He asked if there was anything he could do to learn accounting better,” Connors said. “He excels in anything he does. He’s a special student, and he’s on top of his school work. He drives himself to do his best. He has learned how to balance being a student and an athlete.

“And he’s a treat to watch. I go watch all my students who are athletes.”

Ruffin grew up in a rough neighborhood in Jacksonville. He knew he didn’t want to attend the local high school. He was accepted to The Bolles School, a private institution.

During his freshman year, his mother, Sophie Washington, died in a car accident after she passed out. Ruffin was home with his younger siblings when a police officer came to share the news with the family. It was him who had to tell them what had happened to their mother at the wheel.

“My escape is and has always been basketball,” Ruffin said. “I’m sure it saved me from a lot over the years.”

It was at Bolles Ruffin first heard of Dalton State and was first introduced to Coach Tony Ingle.

“A friend of mine had seen him play and recommended I watch him,” Ingle said. “I knew he was a great fit for Dalton State. Academically, he’s solid. He understands life is not striving to get ahead of other people. It’s learning how to get ahead of yourself through self-mastery, self-discipline, and self-control. He understands the most important thing we have to lose every day is time. He doesn’t waste it. He’s inspirational.”

The team at the time had several upperclassmen on it, and Ingle said it was important for recruits to know they were not going to get a lot of time on the court their first year or two with the program.

Ruffin, who was a prospect for a few colleges, weighed his options and decided Dalton State was the best fit for him. He knew joining such a strong team meant he wouldn’t be in the spotlight, but he knew Ingle would push him to be the best player and young man he could be.

“Coach Ingle didn’t say things the other coaches said to me during recruiting,” Ruffin said. “They were promising me different things. But Coach Ingle said to me, ‘You’re going to be something special.’ That really stood out. He’s very passionate, and he believed in me. He said he would make me a better person and a better man. He gave me a chance, and it has worked out for the best.”

Ruffin played last year as Sean Tate’s backup. Tate was a star on what became a national championship team and is now playing professional basketball overseas. Ingle says he wouldn’t have wished playing behind Tate on anyone, but Ruffin stepped in and took advantage of it.

“Sean is a crowd favorite and a great guy,” Ingle said. “Deshawn embraced the challenge he was given. He practiced every day against Sean Tate and picked up a lot of things from him you can’t always coach, and it has made him a better ball player.” 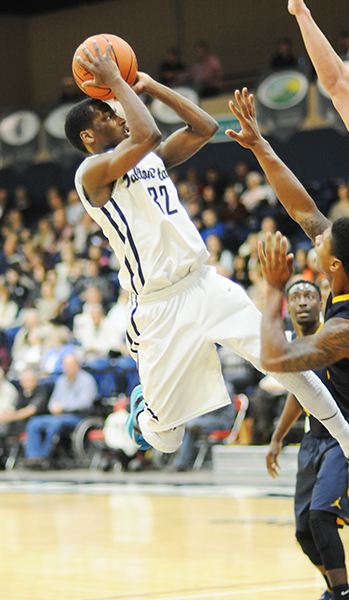 “I have a lot of respect for him,” Ruffin said. “I learned height doesn’t define you. I’m one of the shortest guys on the team this year, but he didn’t let his height hinder him as a player. Guarding him in practice was tough. But it made me a better player. I still look up to him.”

Ruffin had to step up into Tate’s place and become a leader on the team. But Ingle says Ruffin has mastered leading through service.

“You’re here to grow as a person and get an education and a degree while playing basketball for the College and our community. That’s what we’re all about. Deshawn gets that.”

Ruffin isn’t sure what the future holds for him. For now he wants to be the best student he can be and the best basketball player he can be. He still has two years to decide where his life will lead him after college.

“I’m open to going pro one day – NBA or overseas – but I’m really open to anything,” he said. “I’d like to take my business management degree and work in athletics somehow, like as a sports agent or for the NBA behind the scenes. I really don’t know what I want to, do but I’m going to leave myself open.”

No matter what Ruffin chooses or where he goes, he knows he is a better person because he became part of Roadrunner Nation.