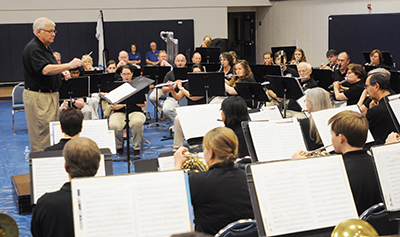 Last year, five servicemen were killed in an attack on a military recruiting center and a military site in Chattanooga, Tenn.

In memory of the brave individuals, Kenyon Wilson composed “Five,” which will be the central work for the upcoming spring concert performed by the Dalton/Whifield Community Band on Thursday, April 14 at 7 p.m. at Northwest Whitfield High School. Wilson will conduct his own work. The concert is part of Dalton State College’s Concerts on Campus series.

The series includes the Dalton State Singers who will present their spring concert at Dalton State’s Goodroe Auditorium at 7:30 p.m. on Monday, April 18. The program will feature works by Grieg, Mozart, Fats Waller and more.

The choir is led by Dr. Robert Dean, a native of Chattanooga with degrees in choral conducting, trombone performance, music theory, and music education. The choir will be accompanied by Dalton’s Paula Pasqua, an active violinist and music teacher known around North Georgia.

The series concludes with the annual Campus Community Concert on Monday, April 25, 7:30 p.m. in the Goodroe Auditorium. This concert will feature the talents of Dalton State’s students, faculty, and staff.