Vanquishing the Darkness: Student Aspires to be a Light to Campus 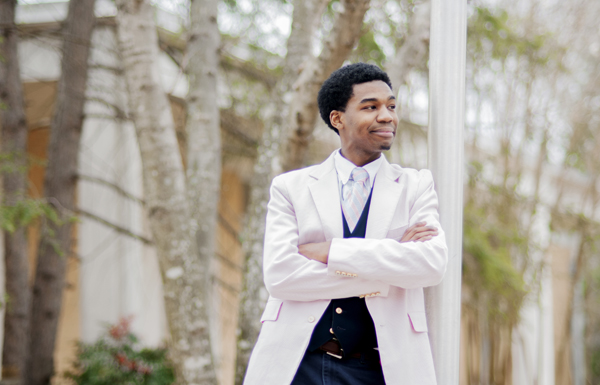 Trevor Gregory Printup walks through campus early one bright, crisp morning.
It’s obvious from his step that he’s happy, even before hearing him belt out “Zip-a- Dee-Doo- Dah,” a well-known symbol of cheer.
His demeanor is a stark contrast to most college students at 8 a.m., often still bleary-eyed while dragging to morning classes.
Gregory Printup stands on the corner of Memorial near the student center during times it’s busiest with students walking. He greets students, shakes their hands, waves, asks their names, and encourages them.
“I like to let people know they’re valuable,” he said. “We should all be a light. The world is full of darkness. But the moment light comes in, darkness vanishes. I want to encourage people, and let them know I care.”
He’s becoming a fixture on campus, and students have begun to look for him standing at his corner.
“He’s such a great person,” said student Kelly-Rose Maier. “He makes people want to talk to him because of his great personality. I just met him, but I’m so glad I did.”
“He’s so uplifting,” added Ebony Callahan.
Gregory Printup’s attitude is rooted in his faith in God. The sophomore management information systems major had considered becoming a missionary, but said that wasn’t God’s path for his life. Instead of pursuing music at another university as originally planned, Gregory Printup came to Dalton State after a mentor suggested it.
“He said I am good at management and computers, and he said I should consider a program at Dalton State,” Gregory Printup said. “Dalton State caught me. Instead of studying music elsewhere, now I’m evangelist for Dalton State. When I get invested in something, I go all in. Every aspect of Dalton State is perfect and has value, from the janitorial service all the way up through the offices in Westcott.”
He doesn’t like praise and doesn’t want to be known for the good deeds around campus. He has been known to pass out candy and even biscuits for breakfast. There are times he secretly pays for people’s meals or snacks in the café. Good deeds aren’t about the notoriety for Gregory Printup. They’re about making people’s day just a little brighter. 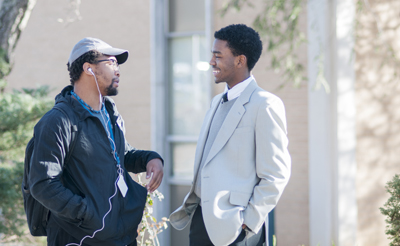 His attitude is just as contagious in the classroom as it is around campus. He gains the attention of his professors for his willingness to work hard and involvement.
“The success is about Trevor and his motivation, not me,” said Dr. Robert Culp, associate professor of economics. “I set a bar and he reached it. He rose to the challenge. He was very enthusiastic and involved. He was able to take the material and see how it applied to the real world. What separated Trevor from other students was his willingness to work, his determination.”
Macroeconomics isn’t the easiest of courses, Culp admits. It requires students to read charts and graphs and apply information in a way they’ve never had to before, and many times students take economics classes with an attitude of survival, he said.
“The real world is messy, and that makes economics more complicated,” he said. “But that didn’t deter Trevor. He would take a concept we discussed in class and realize why his employer at the time was making some of the decisions he was.”
Culp’s class has made a huge difference in Gregory Printup’s life.
“He’s the hardest professor we have,” Gregory Printup said. “I had to work hard. He pushed me to the core. He said he wants our degree to have value. He wants us to read and study, and now I choose the challenging professors. It feels great to be challenged and rise to that challenge.”
Though the classes and professors are known for their rigor at Dalton State, Gregory Printup said there’s no question that people at the College want students to succeed.
“There’s a real sense of unity on campus,” he said. “You feel like you’re part of a family. It’s obvious that you’re cared for as a student. The professors and staff want you to succeed. They let you know they’re here for you.”