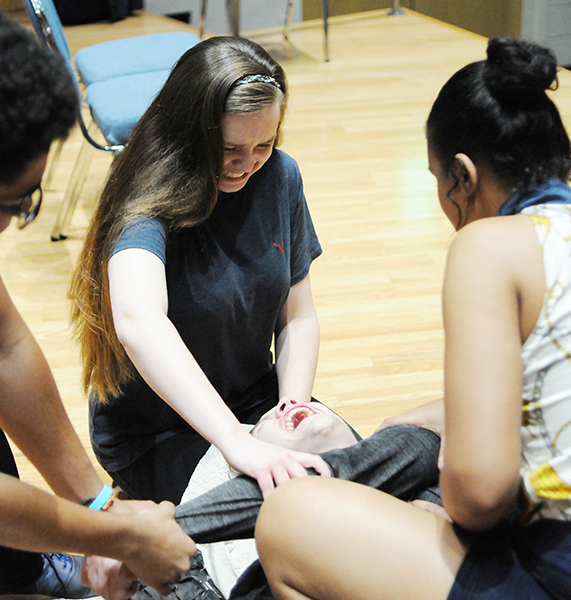 A tale centering around the Battle Above the Clouds in the Civil War is the subject of Dalton State College’s spring play, a piece of historical fiction penned by local playwright Dr. Lorena Sins.

Grass Men runs nightly from April 12 to 15 at 7 in Goodroe Auditorium on Dalton State’s campus. Sins is an associate professor of English at the College.

“It is a joy and a pleasure to bring the play Grass Men to life on the DSC stage,” said Jackie Daniels, an associate professor of communication and theatre who is directing the play. “The story tells about events in this region during the Civil War. It is not about the battles that took place, but gives the personal accounts of those who weathered the aftermath of war. Lorena's research provides a rich background for the story of a wounded soldier on Lookout Mountain and those who cared for him. I feel privileged to be a part of this production.”

The play follows 22-year-old Sandy Gilmer, and his friend, Rafe Hannibal, who travel to Lookout Mountain in 1924 trying to answer a mystery that is half a century old. He’s searching for answers about the disappearance of his great-uncle, Will Carine, a young private in the Union Army during the Chattanooga Campaign.

The pair meet Caleb Seagraves, who has lived his entire life on Lookout Mountain and remembers the Battle Above the Clouds. Caleb tells a story that entwines the fates of Will; Nellie Wooten, a bitter young woman whose lover died fighting for the South; Dory Hannibal, the daughter of a free black family who lived on the mountain during the war; and Ade, a young man who broke away from slavery and ran toward freedom.

Sins grew up interested in the Civil War and traveling to different Civil War sites with her “Yankee” father, she said.

“No matter where one goes on the Eastern Seaboard, the Civil War is there, in the monuments in the battlefield parks, in every little town square, in the graveyards, in the memories of the people, and sadly, in racial attitudes,” said Sin. “The ghosts of that war are everywhere. It was one of those most tragic of all tragedies, the ones that aren’t anybody’s fault (or maybe that are everybody’s fault), but that have to happen.

“History books don’t tell about the cost of the war in human tears,” she said. “We can read that 7,058 soldiers of the United States died at Gettysburg, but we only rarely hear about the girls who never married, the babies who were never born, the mothers who cried every night for their lost sons, the fathers who carried their sons’ deaths around in their hearts like red-hot stones, burning. In war history, the human element is left out. If it wasn’t, it might be too awful to bear, and there might never be another war. So I guess I wrote Grass Men to remind people of what war really means.”

The cast, comprised of students and staff, are Laurie Raper as Aunt Sudie, Will Hardin as Young Sandy/Ike, Jacob Masto as Rafe, Jake Baker as Old Caleb, Daniel Whittenburg as older Sandy, Shelby Arp as Young Caleb, Cameron Hood as Will, Samuel Killen as Isaac/Jake, Aja Stanton as Nellie, Kymberly Franklin as Dory, Shurah White as Ade, and Britni Shipp as Susana.