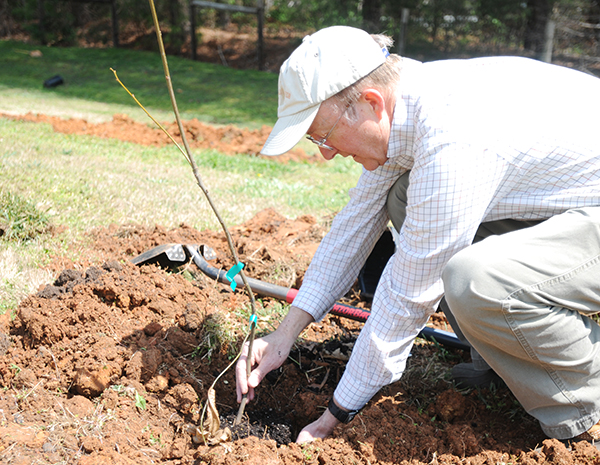 Dalton State is the home to 10 new American chestnut trees after volunteers planted them along College Drive this week.

A tree planted next to Memorial several years ago was given in honor of the late Mary Belle Price. A memorial plaque will be moved from the tree near Memorial to the new grouping of American chestnuts, Bailey said. 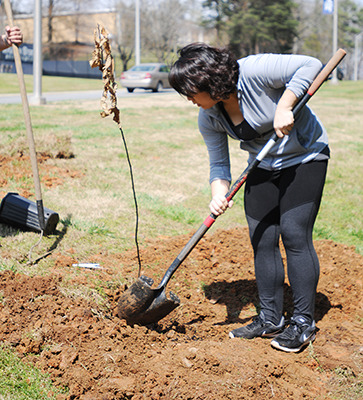 Faculty, staff, and student volunteers, along with grounds crew employees, planted the new trees in a large section of land between I-75 and College Drive in front of the tennis courts on the south end of campus.

The 10 new trees were planted not long after Dr. John Lugthart, professor of biology at the College, recently oversaw the planting of 15 American chestnut seedlings along the College Creek Trail on the Roadrunner Trail System. Those seedlings are the offspring of the tree next to Memorial and were grown in the campus greenhouse.

“The American chestnut was once one of the most common trees in the eastern forests of the United States,” Lugthart said. “Before the early 1900s about one in every four trees was a chestnut, and it was a vital member of the forest ecosystem. Its nuts provided an abundance of food for wildlife and its branches offered habitat for a wide variety of animals.”

A fungus was imported to the United States on the Japanese chestnut in the 1800s, and within 50 years had killed billions of chestnuts. Because the tree’s roots are resilient to the blight, saplings sometimes survive but are very small.

“We are hopeful that in the years to come we will have a beautiful stand of chestnuts beside College Drive and elsewhere on campus,” Lugthart said.