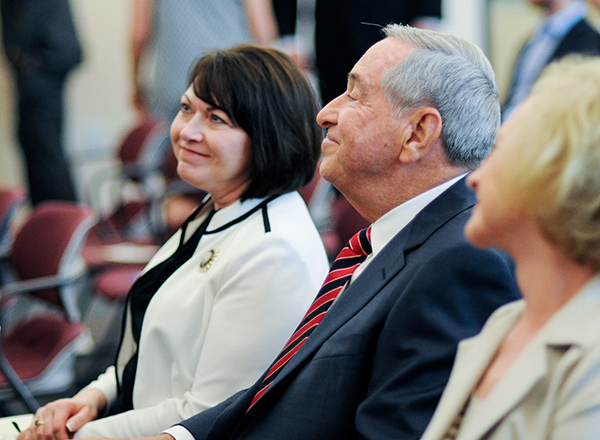 Lamar Wright was the obvious choice to be inducted as this year’s honorary member of Beta Gamma Sigma at Dalton State. It’s not just that he donated $5 million and the College’s School of Business is now named for him and wife, Ann, or that he was in Dalton Junior College’s first graduating class in 1969.

“Honor in this case focuses on altruism and service above self,” Elrod said. “We can see this trait in Lamar’s decades of work for worthy causes such as the Boy Scouts, Looper Speech and Hearing Clinic, the Georgia Sheriff’s Cherokee Boys and Girls Estates, and his church. Even in his work with agriculture, Lamar is serving God’s earth and his fellow man.

Wright’s earnestness is obvious in his strive to put others first.

“Of achievement, reason, and sincerity that fortify earnestness – each of these came to bear when he and Ann made the largest gift in Dalton State’s history,” Elrod said.

The Wrights’ gift is being combined with $5 million from the state, which will be used to renovate and expand Memorial Hall to house the Wright School of Business.