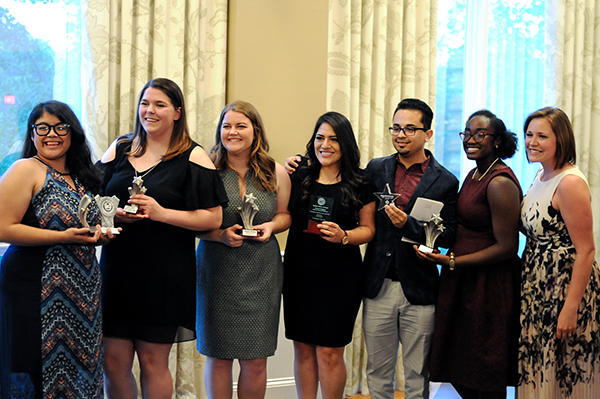 The most coveted award of the evening, the Spence Higgins Hall of Leaders Award for Excellence in Service and Leadership, was awarded to Laurely Caycho, Latifah Collins, and Annalia Ramos. The award, named for Dalton State’s first student body president, is presented to a select group of graduating seniors earning baccalaureate degrees who have demonstrated excellence in campus involvement and who, through their service, exemplify a commitment to the positive enhancement of the College.

The Shooting Star Award is presented annually to select students who have earned 60 or more credit hours and have shown dedication to involvement in campus life and exemplified a commitment to enhancing Dalton State. This year’s recipients are Marlen Hernandez-Garcia, Autumn Hooton, and Jonathan Leberman.

Meghan O’Toole, Bukky Subulade, and Awaz Yaseen received the Shining Star Award which is presented to student leaders with 30 or more earned credit hours who have shown dedication to involvement in campus life and have exemplified a commitment to enhancing Dalton State.

The Rising Star Award was presented to Diego Alvarado Ruiz, Emma Brown, A’Keila Raines, and Emily Test for their dedication and commitment to the College; they have each earned 15 or more credit hours.

Volunteer of the Year Award was presented to Alex Nizamutdinova, and Marlen Hernandez-Garcia was recognized as Student Employee of the Year.

Alpha Omicron Pi, Lambda Delta Chapter, was recognized as the Registered Student Organization, and Dr. Michael Hoff, professor of psychology and the AOII advisor, was honored as Advisor of the Year.

The award for Service Project of the Year was presented to the School of Social Work for its Make a Difference Day project.

Beta Chi Nu’s “TerraCycle” received the award for Outstanding New Initiative, and Annalia Ramos received the Dignity of Difference Award which is presented to a student who has demonstrated academic achievement, outstanding service to the Dalton State community, and service to diverse communities. The nominees have made significant accomplishments in efforts toward promoting the principles of academic excellence, inclusion, and diversity on campus.