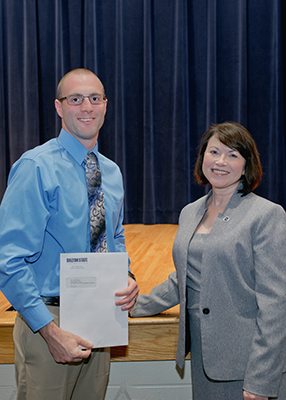 The Dalton State Foundation awarded 178 scholarships at its annual Scholarship Day recently. Donors, students, parents, and friends attended the event during which more than a quarter-million dollars in scholarships and stipends were awarded for Dalton State’s 2017-2018 academic year.

“We are extremely proud of the impacts that so many philanthropists and visionaries are having on our students at Dalton State as shown by the record number of scholarship donors this year,” said David Elrod, Foundation Director. “But for what our scholarship donors have done by endowing or making annual gifts to sustain these awards, none of this would be possible. We are fortunate to have earned their trust, and we strive every day to make the most of these gifts they have entrusted to us for the benefit of our students.

“In this, Dalton State’s 50th anniversary year, we invite anyone who believes in the potential of higher education to change lives to contact the Dalton State Foundation at 706-272-4473 to explore how we can help you meet your philanthropic goals while investing in the human capital of Northwest Georgia,” he said.

Kelly Parvin was the recipient of the Buchanan Family Scholarship. The Bunco for the Cure Radiologic Technology Scholarship was awarded to Allie Beagles, Mariah Kilgore, and Humberto Orozco. Shannon Knight and A’kelia Raines were recipients of the Carlton Candler McCamy Memorial Scholarship.

The Jerry Phifer ’73 Scholarship was presented to Megan Bethune; Hunter Spence received the Jim Delmar Scholarship; Sky House was awarded the John A. Hutcheson, Jr. Scholarship in History; and Megan Callahan was this year’s recipient of the Johnnie and Peter Bakkum Scholarship.

Evelyn Musili was awarded the Kevin Doheny Memorial Scholarship in Mathematics; Selena Gomez was the recipient of the Kiwanis Club of Dalton/Dr. Earl McGhee Scholarship; and Ina Gabe received the Larry and Kathy Johnson Scholarship in Business.

Yazmin Flores and Juliana Gomez were the initial recipients of the Resident of Royal Oaks Scholarship; Diego Alvarado Ruiz received the Rita Salazar Scholarship; and Autumn Hooton was this year’s recipient of the Robert W. Kinard Scholarship. The first-ever Ron Arnold Memorial Scholarships in Communications were awarded to Alex Kerr and Aubrie Pankau.