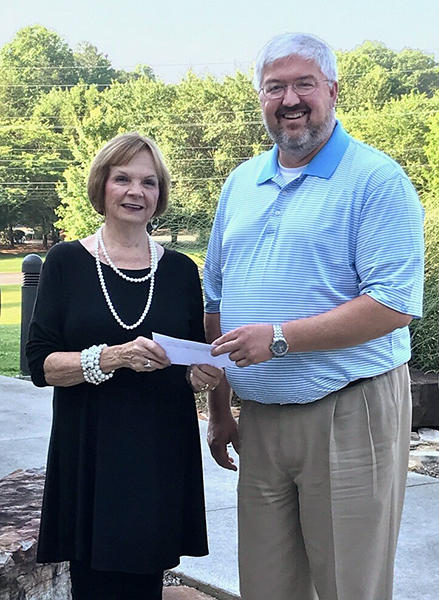 The Dalton State Foundation recently established a scholarship endowment in memory of the late Ron Arnold, a local media personality who was a pioneer in cable television and radio in Northwest Georgia. Arnold died in December 2015.

“We were proud to see the recent announcement of the College’s newest bachelor’s degree in communication, and we found a perfect fit with Ron’s affinity for lifelong learning and mentoring, and our support for Dalton State,” said his widow, Faye Arnold.

Ron Arnold arrived in Dalton in 1968 from his native Shelbyville, Tenn. Known to thousands of listeners and viewers over the years as a disc jockey, radio personality, and television infomercial host, Ron was an accomplished salesman above all else. He was frequently called a modern-day P.T. Barnum for his consummate communication skills and showmanship. Because of his presence on local radio and television, people who had never met him felt like they knew Arnold, and he was honored and humbled by that reputation.

In recognition of his status as a pioneer in the cable television industry and achievements both on and off the air, Ron was inducted into the Legacy Georgia Broadcasters Hall of Fame last fall. His involvement in and leadership of the Carpet Capital Camera Club only extended his communication talents, and he loved gathering with fellow enthusiasts to share tips and images.

“We began talking with the Arnold family last summer about an appropriate way to honor Ron, and they had heard from many friends and former media colleagues and clients of Ron’s that they wanted to do something to perpetuate his memory. We are honored by our newest association with the Arnold family in this way,” says Dalton State Foundation Director, David Elrod.

Gifts to the Arnold Scholarship Endowment Fund may be made online at giving.daltonstate.edu or mailed to the Dalton State Foundation, 650 College Drive, Dalton, Georgia 30720.