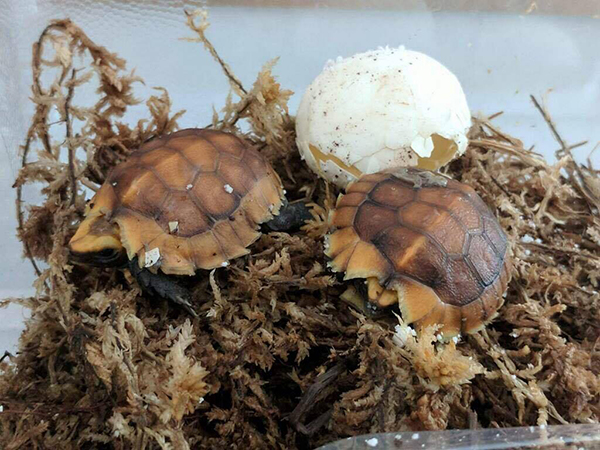 Serrated hinge-back tortoises were bred successfully at Dalton State, one of the first times that has happened in captivity with this species, officials said.

“This is rarely done with this species,” said Chris Manis, a part-time instructor in natural sciences and research associate at the College. “I only know of one or two successes prior to this.”

The hatchlings are Serrated hinge-back tortoises, Kinixys erosa. The parents have been part of Dalton State’s Turtle Assurance Colony for approximately two years.

The colony is part of the Turtle Survival Alliance, an organization dedicated to the conservation of turtle species worldwide.

“We are very excited about these new hatchlings,” said Dr. Randall Griffus, dean of the School of Science, Technology, and Mathematics. “We are proud of our students who work with the turtles, as well as Chris Manis, and Dr. John Lugthart, who assists with the colony. These turtles are a testament to their knowledge and dedication.”

The Serrated hinge-backs eggs were incubated for nearly five months. Since these are rarely successfully bred, Manis says a lot about their ecology, breeding habits, or incubation period is unknown.

“The parent turtles were originally from the Democratic Republic of the Congo so they’re a rainforest species that prefers a dim canopy cover,” Manis said. “We are among the first to successfully breed these.”

Dalton State’s colony is home to about 15 different species of endangered turtles. Griffus is hoping to expand facilities for these efforts in the near future. Currently, several of the species are in the College’s greenhouse, which is being shared with botanists.

The colony has provided research opportunities for professors and students. Experience caring for the turtles has helped several of Dalton State’s graduates land jobs and graduate assistantships in related fields.