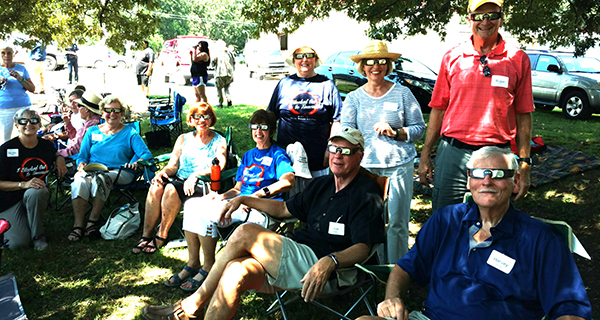 The towns of Dalton, Ga. and Englewood, Tenn. are not sister cities, but they are bonded in a very special way. On Monday, Dalton State’s Solar Express rolled into Englewood, swelling the tiny Tennessee town’s population by 10 percent as students, faculty, staff, and townsfolk enjoyed Englewood’s front row seat to the Great American Eclipse.

Located less than an hour and a half from Dalton, Englewood experienced more than two and a half minutes of eclipse totality, almost as long as anywhere in the United States. The town, overlooked by many in favor of highly promoted Tennessee venues including Nashville and Sweetwater, turned out to be a perfect spot from which to witness celestial awesomeness. 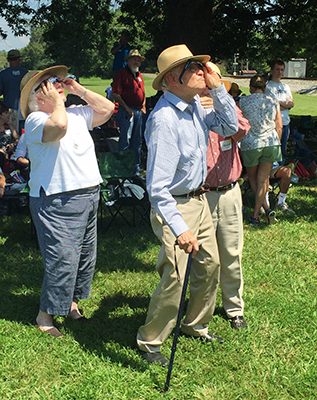 Happily installed in a city greenspace under a sprawling oak tree, the Solar Express travelers set out folding chairs and waited for events to unfold, which they did in spectacular fashion. Dalton State astronomy professor Dr. Samantha Blair provided commentary on what the group could expect to see: stars, planets, corona, diamond ring effect.

Younger members of the group helped older ones to view the sky through eclipse glasses as a bigger and bigger bite was taken out of the eclipsing sun.

Things happened quickly as the moment of totality approached. An eerie twilight settled over the park. Confused cicadas grew louder and bolder. Street lights switched on. The temperature dropped. And soon there was nothing left to see but a bright white ring around the fully eclipsed sun. The crowd cheered and many wept as the event unfolded around them. Glasses came off and heads tipped skyward to take it all in. Camera phones failed to capture the majesty of the sun in eclipse, but succeeded in capturing human response to it.

“Getting to see the sun disappear and seeing the beautiful halo of light around it was awesome,” said Dr. Nancy Mason, a professor of Spanish at the College. “The setting in the peaceful town of Englewood made the experience even nicer - the park, the helpful law enforcement and firemen, and all the friendly visitors in a greenspace away from a lot of crowds and traffic - helped us focus on the solar experience. It truly made a wonderful memory!” 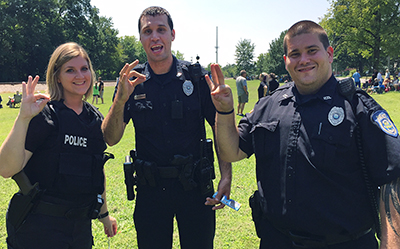 Scarlett Freelin shared the eclipse with her son, Nick, a student at Dalton State.

“The experience was phenomenal to say the least,” she said. “We quickly noticed the drop in temperature at the time of totality; along with an increase in the sounds of crickets and cicadas. We noticed our shadows were a very crisp outline; and we were also able to view several planets/stars as well as the corona. It will definitely be an event we will remember as a once-in-a-lifetime experience.”

For some, the eclipse was spiritual.

“It was an amazing view of God’s creation,” said retired teacher Ann Warren.

Others were poetic in their recollection of events. Rita Sims, a Dalton State student, wrote “For those few hours, everyone was filled with anticipation and excitement of a phenomenon that no cell phone, computer or TV screen could ever portray. The Earth, moon, and sun joined in a celestial waltz, then paused for a breath-taking moment of magic. The sky darkened, the cicadas slowly started their loud bussing, and the temperature dropped about 10 degrees! No one spoke as we sat in awe of the magnitude of our wonderful Milky Way galaxy. We were all 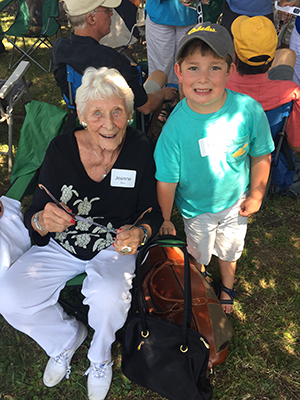 one with creation, and I will never forget the magic!”

Patsy Gordon said, “I was pretty impressed when I saw the Eiffel Tower for the first time, but this has that beat,” but Dr. Bonnie Semora, a professor of criminal justice, was a bit underwhelmed. “It wasn’t exactly what I expected based on the media hype, but it was an awe-inspiring experience,” she said.

Helen Crawford, a Dalton State alumna, likewise said that “there were few real surprises for me, but I do remember that the cicadas starting their noisy song well before it got dark and then ended abruptly as soon as the sun pushed away the darkness. Also, I was captivated by the strangeness of the twilight.”

A point on which all agreed was the graciousness of the town of Englewood, population about 1,500. The town’s restaurant, the Tellico Junction Café, reserved half its tables for the Solar Express, and local police escorted the Dalton State buses through town and back on their way following the eclipse.

Beginning to end, the Solar Express provided an eight-hour trip to witness two and a half minutes of history but a lifetime of memories for the 111 participants on board.