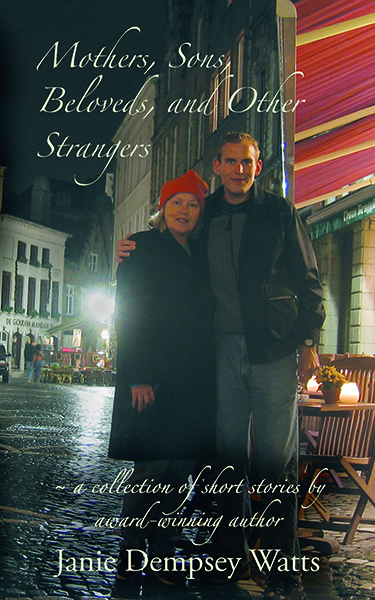 Janie Dempsey Watts’ stories may be fictional, but they draw from real life experiences, and real life does not always end how we want.

Her latest book, “Mothers, Sons, Beloveds, and Other Strangers,” a collection of short stories that feature people facing journeys, will be the subject of an upcoming book talk. The event is Thursday, Oct. 26 at 6 p.m. in Dalton State’s Roberts Library. The book talk is free and open to the public.

“These 15 short stories were inspired by people and situations I encountered in the South, California, and Europe,” said Watts, who enjoys working with students as a part-time writing lab instructor at Dalton State. “All explore relationships, and feature characters facing inner and outer journeys with unexpected endings. Some of the stories are humorous, some are romantic, and others are edgy.”

Watts says that some of her stories may take readers outside of their comfort zones. Her stories “Rotten Apples,” “Lavanderia Automatica,” and “Journey to Yanu” are among these.

Watts was born in Chattanooga, but spent much of her young life at her grandmother’s farm near Taylor’s Ridge in Catoosa County. She moved to California to pursue a dream in journalism; there she received her bachelor’s degree at Berkeley and master’s at University of Southern California.

“I have written for newspapers, magazines, and I had my own column for nine years with ‘Catoosa Life Magazine,’" said Watts. “Some of my non-fiction work was published in the ‘Chicken Soup for the Soul’ series, ‘Guideposts,’ ‘Christian Science Monitor,’ and ‘The Los Angeles Times.’”

After moving back to the South, she returned to living near her grandmother’s farm. She is now married with two children and three grandchildren.

Watts works include two novels, “Moon Over Taylor’s Ridge” and “Return to Taylor’s Crossing.” She has been recognized for her works, having received awards from the Knoxville Writers Guild in 2015 and the Appalachian Writers Series in 2014, among others.