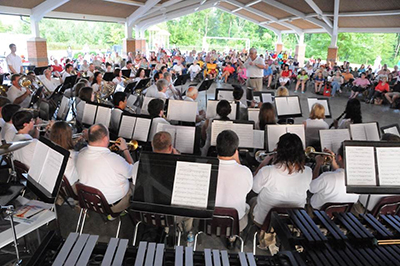 The Dalton/Whitfield Community Band celebrates its fifth year this month with a concert featuring many songs from American pop culture.

The band, founded by Dalton State’s Dr. Ellie Jenkins, as well as George “Smitty” Barnett, and Mickey Fisher, will perform Thursday, Nov. 9 at 7 p.m. at Northwest Whitefield High School. It is free and open to the public. The band now has 60 members including numerous Dalton State students and faculty.

There will be musical selections by Simon & Garfunkel, including “The Sound of Silence;” John Williams, composer of songs in works such as “Star Wars” and the first three Harry Potter films; and John Philip Sousa, whose works including “Stars and Stripes Forever” and “Semper Fidelis;” and more.

The concert will also feature the Dalton State Singers who will perform with the band on Williams’s “Hymn to the Fallen” and the Dalton/Whitfield Clarinet Quartet which will perform two short works.

“The band gave its first concert on April 15, 2013, for an enthusiastic audience of about 300 people,” said Jenkins, associate professor of music. “The band celebrated the first anniversary of its existence in Nov. 2013 with a rich and varied program of American band music.”