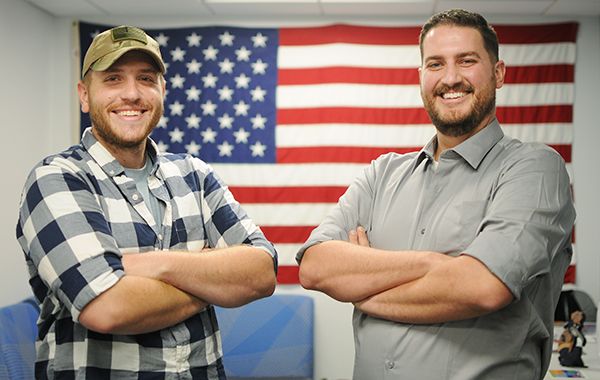 Ian Sorrow was sitting in class at Dalton State one day when he grew jittery and had to step out to ease himself down from a panic attack.

For someone who spent 12 months living in war-stricken Iraq where hearing gunfire was commonplace, it’s not always easy to overcome that constant feeling of “fight or flight” that was needed for survival while there. That instinct can be triggered by the smallest word, look, or action.

Sorrow spent eight years in the Army and saw two major deployments the Middle East before entering Dalton State as a pre-nursing student. One deployment was during the Iraqi elections when many polling places were being attacked.

“There have been a lot of ups and downs,” he said. “I had to discover my abilities. It has been 10 years since I was in high school so I had to relearn how to learn. It’s odd sometimes to sit there in a classroom with 18-year-olds who haven’t had the same kind of life experience I’ve had.”

Despite the challenges veterans often face after leaving the service, Sorrow and fellow veteran Clint Dodd say Dalton State provides them with a safe environment to learn and grow. The veterans have their own resource room, a registered student organization for veterans and those who support the military, and the College provides Green Zone training for faculty and staff to help them better understand the transition to civilian life.

There are also many activities planned for veterans on campus this week in honor of Veteran’s Day, which is annually on Nov. 11. Activities include the Mobile Vet Center, which is open to the public, on Thursday, Nov. 9 from 10 a.m. to 2 p.m.

“The transition to civilian life and civilian life as a student is difficult,” said Dodd, a chemistry major who is also pursuing an associate’s in medical laboratory technology. “We have a lot of experiences held in common with other veterans that aren’t shared in a classroom setting. We have cultural differences, age differences, and social differences.”

Dodd enlisted in the National Guard after the terrorist attacks on Sept. 11, 2001, when many traditional college-aged students were toddlers. He served in Iraq shortly after Operation Iraqi Freedom began.

Originally Dodd had attended a military school, but multiple deployments made it hard to return.

Katrina Autry, veteran affairs representative for Dalton State, said there are approximately 90 student veterans on campus currently. She said, there may be more that have chosen not to disclose their veteran status.

“These students are coming from an environment that is extremely structured and disciplined,” Autry said. “They have different ways of thinking and interacting. They have massive amounts of life experience, both good and bad. In some cases, they have seen and experienced things that we could never even think to imagine. The needs of these students are much different than those of the mainstream student population.”

The transition to life as a student can be challenging for any nontraditional student, but especially the veterans. Many are juggling full-time jobs and families, Autry said.

“Acclimating to a less structured environment can be daunting and sometimes classes can seem mundane,” she said. “The Veteran Association has provided an outlet and a way for these students to interact with one another and become involved in activities on campus. The resource room also provides a common space for studying, decompressing, and in some instances, sleeping after working a night shift before coming straight to campus.”

The veteran organization’s focus is on providing peer support for those with a background in common. Those who have family in the military or are big supporters of the military can also join the organization. Members hold an annual drive for the Department of Family and Children Services collecting items for children taken into protective custody. Members also participate in the Adopt-a-Mile program and are responsible for College Drive in front of the College. They also participate in as many campus events as possible, including running a booth at the annual Fall Family Festival.

“Most of us have families and work and have several other responsibilities,” Dodd said. “Some of us have sustained lifelong injuries. We want to participate in what we can, though. It’s really about camaraderie. That’s a part of the military most of us miss the most. We’re all diverse and have different backgrounds and served in different branches of the military, but we help each other. We all have the same goal – to get a college degree.”

Autry is the first point of contact for any veteran wanting to be a student at Dalton State. She makes sure they know what services are available to them, and she gives them a checklist to make sure they’ve done all they need to be successful and stay on track.

“I don’t do all of this as a means of hand-holding,” she said. “I do this as a way to ensure this population is successful. Working with our veteran students is amazing. These students are brilliant, hilariously funny, and driven.”