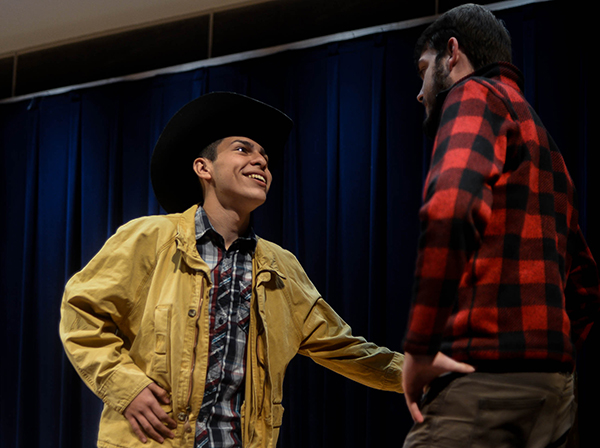 The setting is the middle of a snow storm. Five people on a bus seek shelter in a Kansas City diner in William Ingle’s timeless, light-hearted, romantic comedy, “Bus Stop,” which will be performed at Dalton State this month.

The play will run nightly Wednesday to Saturday, Nov. 15 to 18, at 7:30 in Dalton State’s Goodroe Auditorium and costs $7 online at Event Brite (www.eventbrite.com/e/bus-stop-tickets-37277208133), or at the door. It is free for all Dalton State College students, faulty, and staff with a Roadrunner ID.

“The message of this show is timeless. Yes, it is set in 1956, but the search for love is something everyone can relate to,” said Kim Correll, lecturer in communication and theatre and director of the play. “It's filled with comedy and poignant moments. It's a classic play that deals with finding love - sometimes in the least likely of places.”

The passenger with the most to worry about is Cherie, a ritzy nightclub singer, who has been kidnapped by a 21-year-old rancher who is determined to get her Montana. Even as she is trying to get away from the cowboy she thinks, “Somehow, deep inside of me, I got a funny feeling I'm gonna end up in Montana …" The other passengers include the bus driver who creates a friendship with the café owner, a scholar coming to terms with himself, and a café worker who will find her own bit of romance.

The cast includes Madison Hammons as Elma, Adrian Thompson as Grace, Daniel Whittenburg as Will, Katie Lanning as Cherie, Jake Baker as Dr. Lyman, Jonathan Davis as Carl, David Moss as Virgil, and Jose Arredondo as Bo. The crew includes Will Hardin as the stage manager and Laurie Raper as costume designer.