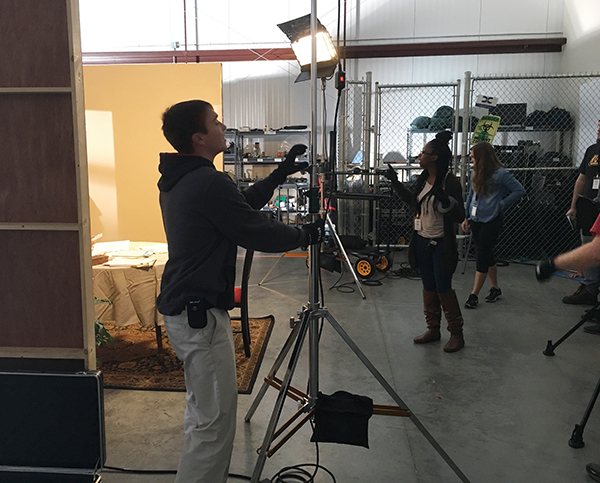 The timing worked out perfectly for Sawyer Locke.

After graduating from Northwest Whitfield High School in 2012, Locke joined the National Guard and went away to college. While away, his mother and sister were in a serious wreck that left his sister, who was 15 at the time, with a spinal injury and limited mobility.

“I had to come home,” said Locke. “Dalton State College started offering the four-year communication degree, and I saw they had added a film studies concentration. That is what gave me the motivation to get back into school and apply myself. I knew what I wanted to do.”

Locke spends one day a week at the Georgia Film Academy, located at the Pinewood Studios in Fayetteville, outside of Atlanta. There he studies the behind-the-scenes of the film industry including lighting, sets, producing, sound, and makeup. He has learned how to conduct himself on set and why there are so many credits following a movie.

Several television shows and movies are now being made in Georgia, including The Walking Dead, Stranger Things, The Hunger Games, and some Marvel productions. Students who major in communication with a concentration in film studies will have the opportunity to have a hand in such productions through internships granted by the Georgia Film Academy.

“Internships could potentially lead to jobs, and it’s a networking game,” Locke said. “We’ll have the opportunity to get on a set and know how they do everything. I would love to work for Marvel or Disney. They’re my favorites. But I’d love to do almost anything. My sister and I have a dream to show people you can still do things, like travel, even if you’re in a wheelchair. We would love to do a show on that and end the stigma about people in wheelchairs.”

By offering this concentration, Dalton State is addressing an immediate need in the job market in Georgia.

“Today’s entertainment business is one that receives a great deal of attention in media venues locally, nationally, and globally,” said Dr. Pat Chute, provost and vice president for Academic Affairs. “For Dalton State students to be on the cutting edge of this growing industry is a remarkable opportunity for them as well as the entire North Georgia region.”

“The goal of the bachelor of arts in communication program is to prepare students for entry level and higher positions in the professional workforce and to be ready for the challenges of graduate work if they so choose,” she said. “Internships, either with the Georgia Film Academy and with organizations in the Northwest Georgia region, are a key component of the major.”