College Observatory to Be Site for Meteor Shower Viewing 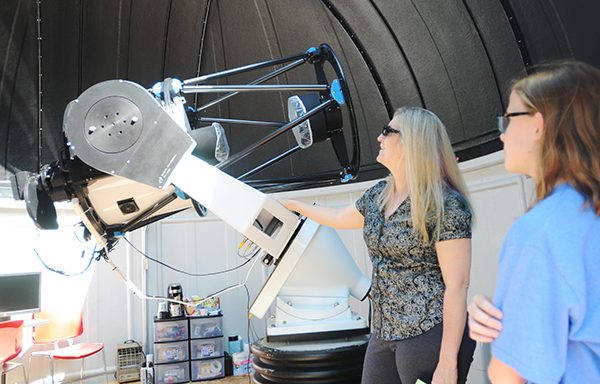 The Dalton State Observatory will be the site of a public viewing of the Dec. 13 Geminid Meteor Shower, an annual celestial event in which hundreds of meteors are visible streaking across the night sky.

The observatory is located on the grounds of Beaverdale Elementary School on the north end of the county; the viewing will be free and open to the public. Parking is limited at the observatory; Dalton State will provide free bus transportation from the campus for those who wish to carpool to the observatory site.

“The Geminid Meteor Shower is one the most exciting of the year, boasting upwards of 120 meteors per hour at prime viewing sites,” said Dr. Samantha Blair, assistant professor of physics and astronomy. “This translates to seeing up to 120 brilliant flashes of light across the sky per hour because a meteor is defined as the flash of light you see as a bit of dust or rock enters the atmosphere of the Earth.

“The frequency you will witness depends on location, but you are likely to experience quite a show if you are in a dark area with a good view of the sky.”

The Beaverdale home for the observatory was selected because it is just such a site, she said, noting that the remote location between Prater’s Mill and Murray County has a vast view of the night sky with minimal light pollution created by artificial lighting.

“A meteor shower occurs when the Earth passes through a trail of material left behind from the passage of a comet or collisions between asteroids,” Blair continued. “The Geminids were created by the Near Earth Object 3200 Phaethon that possibly collided with another object and left a debris trail 200 years ago.

“As we orbit the sun, we pass through this trail every year in December, and at that point, it appears that the radiant –or direction from which the shower is emanating—is from the constellation Gemini, hence the name Geminids.

“The intensity of the Geminids just keeps increasing as Jupiter’s gravity pull particles closer to Earth. It is certainly a show worth seeing,” she said. Blair will operate the observatory’s 24-inch reflecting telescope that will offer superior views of deep sky objects as the meteors shower our skies.

She said that the meteor shower should be visible from any dark outside location, the farther from city lights, the better. The shower will peak at 2 on the morning of Thursday, Dec. 14 and visible meteors will be scarcer earlier in the evening.

A special invitation is extended to area photographers who would like to shoot the meteor shower. A camera mounted on a sturdy tripod with an open shutter can capture spectacular images as meteors streak across the night sky. Blair said she hopes to have the College’s 5-inch refractor and a camera poised to capture images.

“You can take many 30-second exposures and stack them to get an image with a beautiful background and multiple meteors,” she said. “Of course viewing the shower from the observatory will give the view a chance to view deep sky objects on the screen as we observe the shower. I hope to capture some streaks on our images.”

“We are fortunate to have the observatory and are very pleased that we can use events such as the Geminid Shower to share it with the community and stimulate interest in science,” said Dr. Randal Griffus, dean of Dalton State’s School of Science, Technology, and Mathematics.

Beaverdale Elementary School is located at 9196 Highway 2, Dalton, GA  30721. When entering the school grounds, the observatory will be on a gravel drive on the left. Participants are advised to dress warmly and wear sturdy shoes and bring a flashlight to light the way to the viewing. Those wishing to ride the free bus should park in the lot beside the parking garage on George Rice Drive on the Dalton State campus. Buses will leave at 7 p.m. Wednesday, Dec. 13. Please email Pam Partain at ppartain@daltonstate.edu with the subject line Geminid to reserve a bus seat.

In the event of rainy weather or overcast skies, the viewing will be cancelled.