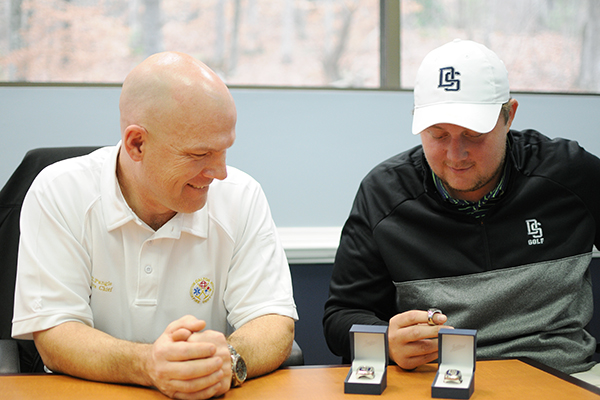 And as a former athlete himself, Dalton Fire Chief Todd Pangle knew what those rings meant to Johnson.

“Finding something that small is rare,” Pangle said. “The only firefighters on that scene who understood what those rings meant were those of us who were former athletes. We know the hard work and dedication that goes into earning championship rings.”

Pangle was able to recover all three, as well as Johnson’s high school class ring.

“Every fire scene is different,” he said. “This one was particularly difficult. I wouldn’t even let any of my guys attempt to get the rings because the structure wasn’t well supported after the fire. It’s the luck of the draw sometimes what we’re able to recover. We were very lucky we were able to recover them all for Dalton. We see a lot of loss in our job. Finding these rings represents something good that came out of a terrible situation.”

The weight of the water used to douse the fire at Park Canyon the morning of Dec. 15 collapsed Johnson’s second story apartment down onto the floor level. The water rushed through the first level and threw the door open. In the process, the nightstand, where the rings had been housed, was smashed to pieces.

“To be able to find the rings after that happened is insane,” said Johnson, a business management major expected to graduate in fall 2018. “I was disappointed, but I knew I was fortunate because most everything in my apartment was replaceable. It wasn’t until later that I was able to see the damage and how all the stuff was meshed together. I can’t believe my rings were recovered.”

Johnson had already left for his home in Forsyth for winter break when the fire occurred. He received a text from a friend that contained a link to a news story about the fire. The cause is still undetermined, Pangle said.

Ben Rickett, golf coach at Dalton State, received a text about the fire and went to check which building it was, knowing Johnson had already left for the holidays.

“I wanted to be able to tell him it wasn’t his building,” Rickett said. “Jim McGrew, also a golf coach for the College, went over there. I was worried we wouldn’t get up to the scene, but everyone knew Coach McGrew from his time at coaching Northwest Whitfield High School, and they waved us through.

“Dalton has been here 3.5 years now,” he said. “When you coach these guys you’re not just their coach; you develop a relationship with them, a friendship that lasts for years. I didn’t want it to be his apartment. I appreciate this community so much. Everyone is asking if he needs anything. If he had needed help, we would have been able to replace his whole apartment based on the calls I received.”

Pangle knows what it’s like to have that kind of relationship with a coach, as McGrew was his coach when he was in high school.

“To have the coaches come up to the scene like they did the morning of the fire speaks well of them and the athletics program at Dalton State,” he said. “It shows what a personal interest they take in their students.”

“People went above and beyond for people they didn’t even know,” Rickett said. “It’s a nice thing to be part of and to witness. There’s not enough of this in the world.”