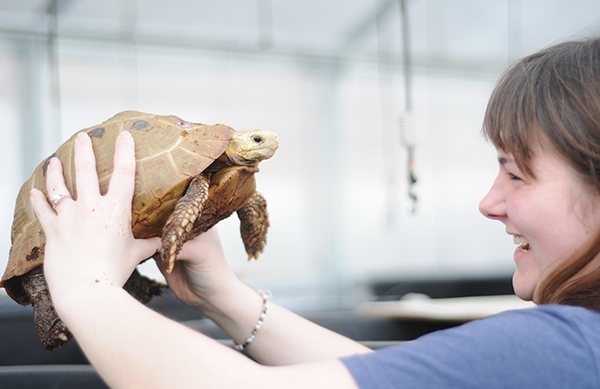 Kaytlin Pepper won’t graduate college for another year, but she already knows she’s making a difference in the world of conservation biology.

Pepper is one of several students who help with Dalton State’s Turtle Assurance Colony, which is home to several species of endangered turtles. The colony partners with the international Turtle Survival Alliance, a conservation group dedicated to the conservation of endangered and threatened species worldwide.

Many endangered turtles are not often successfully bred in captivity, but during the last four years since TAC began, researchers at Dalton State have made strides in hatching turtles. TAC has grown from four species and a few turtles to 10 different species and approximately 65 turtles.

“I already feel like I’m making a difference,” said Pepper, a biology major who expects to graduate in spring 2019. “When we hatched the Kinixys erosa (serrated hinge-back tortoises), that was a big deal. It’s so rarely done in captivity. We were one of the first groups to successfully breed and hatch this species.”

“We have an excellent fertility rate with the homeana,” Manis said. “We have with the erosa, too. In other places people are getting eggs all the time but they’re not hatching turtles. We have hatched seven erosa and 12 homeana. So we’re doing well with those species.”

Now, Manis and his team of students are leading conservation groups in monitoring the hinge-back tortoises’ growth and dietary needs. It will give scientists more insight on what these turtles need to survive.

“The babies are more temperamental,” said Daley Harrison, a biology student who has spent three years working with TAC. “If an untrained person walks by and sees a baby turtle yawn, they may think ‘Oh, that’s cute,’ and not realize it’s a sign of respiratory distress. Hatchlings are more sensitive to environmental changes than adults. So we train students who are new to TAC to care for the adults, and those of us who have more experience focus on the hatchlings.”

The spiny turtles, Heosemys spinosa, have been a problematic species at TAC but also worldwide. While the spiny turtles at Dalton State have laid eggs, none of them have been viable. There is currently one in the incubator. 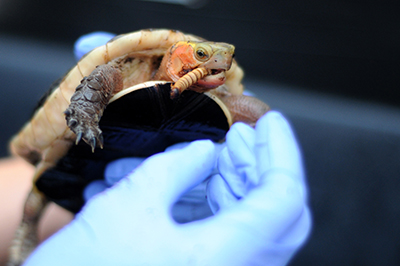 “These are poached at a high rate and are sold as high dollar pets overseas,” Manis said. “In some places they’re so desired people will pay $3,000 or more for the species. These were intercepted by U.S. Fish and Wildlife Service before being shipped overseas. They’re endangered and declining, but there has been some success breeding them in captivity.”

When new turtles are brought into the colony, Manis spends extra time monitoring them and learning their behaviors, as well as checking for health concerns. One of the female wood turtles has become a finicky eater, which is sometimes a sign of declining health.

“So I’ll be watching her closely,” he said. “These are my favorite turtles we have right now. They’re a wild caught animal, and they’re intelligent. This species can do mazes and they do ‘worm stomping’ in the wild to bring earthworms to the surface to eat them. The way they stomp mimics rain hitting the earth. These turtles do things other species don’t. They are beautiful animals.”

Wood turtles are semi-aquatic and need access to a water source. They’re also used to a temperate climate. But currently they’re in the greenhouse, which is too tropical for them long term.

Plans for expansion include outdoor enclosures for the more temperate animals and a new greenhouse so that turtles and botanical specimens will no longer have to share space.

There is room and opportunity for TAC to continue to grow. Manis says as long as there are biology students willing to put in the time to care for the animals, the program can continue to expand.

“Our students are responsible for the bulk of the day to day work,” he said. “The problem we’re running into is that we’re working with juniors and seniors. We’re looking for students earlier in their college career who are committed to working with the turtles. We’d like to teach them the husbandry skills early on so they can move onto more in-depth research and take on more of a leadership role with the colony their junior and senior years.”

Working with TAC teaches students basic skills necessary to work with any type of animal, not just reptiles. 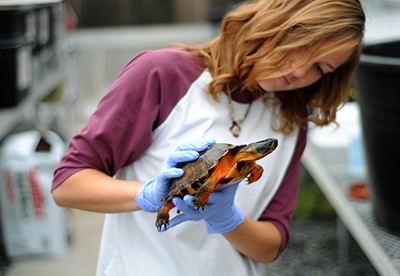 “Most of our students who come in to help aren’t looking for herpetology, but they’re still going to acquire skills needed, such as how to handle animals and commitment,” Manis said. “You may not feel well but the animals have to be cared for. We’re looking for students who are dedicated to this. Even though it’s all turtles, this colony is a treasure trove of biodiversity. Each species’ needs vary greatly.”

Former students who have been involved in TAC have gone on to be successful after graduating from Dalton State. One student is studying salamanders in graduate school; another works in husbandry at the Tennessee Aquarium; and another is now teaching at another institution.

“We already have experience,” Harrison said. “We already know how sanitize and quarantine the animals. We know how to regulate their temperatures, and we know about their diets. We are an asset to the aquarium.”

“Working in the colony is a really good starting place,” Pepper said. “We’re getting to make connections and do on-campus research. I work with Chris Manis on my undergraduate research. He, and this experience, have opened doors and given me a lot of experience. I’m grateful for it.”