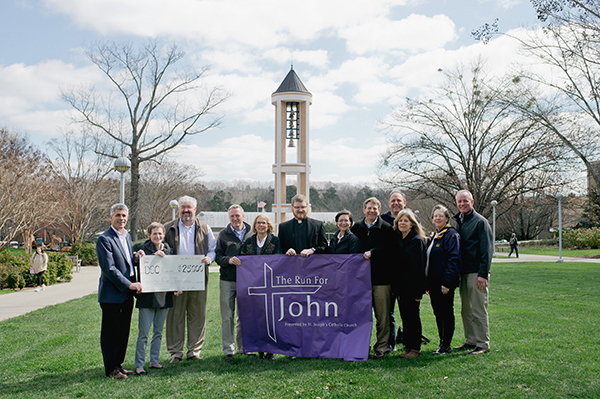 No one who knew John Bruner could ever forget his ear to ear grin or his passion for running.

When John died at 19 from an undetected heart anomaly while running the Missionary Ridge Road Race in Chattanooga, family, friends, and fellow parishioners from Dalton’s St. Joseph’s Catholic Church rallied around the Bruner family to support them through the anguish of their sudden loss.

Soon after, an idea emerged to honor John’s love for his church, faith, family, and friends with a 5K road race to raise money for college scholarships. Cathy Blevins, St. Joseph’s religious education director, approached the Bruners with the idea to bring together John’s friends from the church, Dalton High School, Georgia College & State University, and the Carpet Capital Running Club.

The first “Run for John” was held in 2008, and in the years since then the annual event has raised and awarded more than $100,000 to more than 200 local college students.

On April 28 this year, a decade after the inaugural race, St. Joseph’s will host the final Run for John as a celebratory fun run in memory of its namesake and in honor of the event’s impact in the past and in the years to come.

The scholarship endowment fund generated by The Run for John’s proceeds over the years will be moved to Dalton State College.

“The loss of a child is unimaginable, but to celebrate his memory by providing opportunity for so many others is a beautiful legacy,” said Dr. Margaret Venable, president of Dalton State. “We are honored to house the scholarship endowment and to help administer this precious gift.”

“I was humbled when Greg Bruner first approached me about bringing the endowment to Dalton State,” says David Elrod, director of the Dalton State Foundation where The Run for John Memorial Scholarship Endowment Fund will be managed. “Working with Greg and the folks at St. Joseph’s was a special experience. I knew by the reputation of The Run for John that this was a very personal and emotional matter for the family. That they would bring the scholarship endowment to Dalton State speaks volumes about their support for the College. Our job now is to be good stewards of these gifts they have entrusted to us.”

The Bruner family’s connections to Dalton State run deep. Margie Bruner, John’s mother, was the College’s first cross country coach when intercollegiate athletics returned to the campus in 2013. She was named the Southern States Athletic Conference Cross Country Coach of the Year in 2014 and 2015. Prior to that, she served as a member of the faculty and coordinated the College’s first year experience program that prepares freshman students for the realties and rigors of college work. Margie Bruner mobilized a group of her friends, “the mom brigade,” to help shepherd new students through their first year on campus.

“We encourage additional gifts to The Run for John Memorial Scholarship Endowment Fund online at www.giving.daltonstate.edu or by mail at 650 College Drive, Dalton GA 30720,” Elrod said.

For more information about this year’s Run for John, visit www.therunforjohn.org.

Donors interested in scholarships or other giving opportunities at Dalton State may contact the Dalton State Foundation at 706-272-4473 or www.giving.daltonstate.edu.