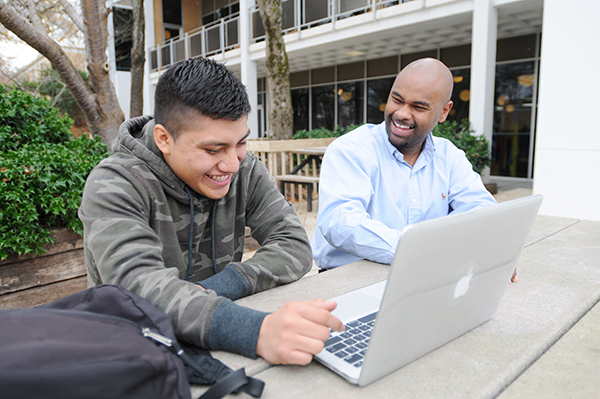 For 15 years Dalton State has had the highest Latino student population in the University System of Georgia. The College is now officially recognized as a Hispanic Serving Institution, the first in the state of Georgia and one of the first in the south. It’s an achievement to celebrate, and the community is invited to help the College do just that on Thursday, April 26.

Dalton State will host an HSI celebration at 3:30 that afternoon at the foot of the Burran Bell Tower on the college quad, and all are invited to attend.

“This is a happy time for Dalton State,” said Dr. Margaret Venable, president. “We are proud to be Georgia’s first HSI and for all that says about the educational aspirations of our community and region.

“This is a natural for us because these students are the children of this community,” Venable continued. “For the most part they grew up in our local school systems, and their parents have impressed upon them from a young age the importance of a college education to their future success.”

In order to be named an HSI, a college or university must have a student population that is at least 25 percent of Latino descent. Nearly 27 percent of Dalton State students enrolled last fall self-reported that they were of Hispanic origin.

In the fall of 1999 Dalton State recorded a Latino student population of 1.9 percent and for the next three years trailed schools such as Georgia Tech, Gainesville State College, and Georgia Perimeter College until fall of 2002 when Dalton State surged ahead and never looked back.

As one of only 492 HSIs nationwide, Dalton State is eligible to apply for federal grants to fund campus improvements that will benefit all students. According to Quincy Jenkins, Dalton State’s director for Hispanic and Latino outreach, improvements could range from capital projects to additional staff to program improvements to an endowment fund. Most HSIs are located in western and southwestern US states and Puerto Rico. Georgia Gwinnett College in metro Atlanta has a Hispanic student population of 20 percent and is expected to be Georgia’s next HSI.

“We are proud to make history in becoming Georgia’s first Hispanic-Serving Institution,” Jenkins said. “Now, the real work begins as we continue to become a leader in educating our nation’s fastest growing demographic while being a first-choice and inclusive institution for all of our students.”

But first Dalton State takes time out to celebrate.