Ware Ready to Tell ‘Our Story’ of Northwest Georgia 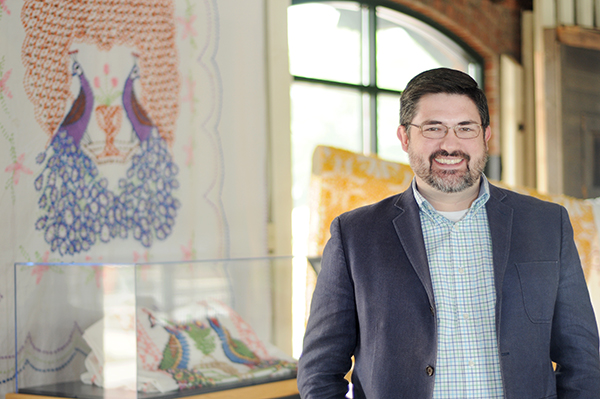 The longer Dr. Adam Ware worked on preserving central Florida’s history, the more he wished someone would preserve Northwest Georgia’s.

Ware, a 2000 graduate of Dalton High School, was living in Orlando working at The Orange County Regional History Center as a historian and research librarian. He wanted to do for Dalton and the surrounding area what he was doing for Orlando – collect, preserve, and interpret items that represent the history of the region.

He recently began as the director of the Bandy Heritage Center at Dalton State where he will archive Northwest Georgia’s history.

“The farther I got away from Dalton the prouder I was to be from Dalton, and the more I thought I could do this in Northwest Georgia,” Ware said. “There are stories worth sharing. We want to make sure these stories get preserved. Your past isn’t sepia tone and black and white photos. It’s kids going through fairyland caverns at Rock City and being weirded out by the UV lights, for example. It’s not like other places. That’s more than enough reason for the Bandy Heritage Center to exist.”

Though the Bandy Center formed in 2008 through the generosity of Dalton businessman Jack Bandy, its focus has mostly been on programming and not archiving. Ware is dedicated to archiving - often items people wouldn’t necessarily think of donating to a museum.

“I hope that he can grow the program in archiving so that Dalton State can become a leading college in this approach to historical preservation,” said Dr. Pat Chute, provost and vice president for Academic Affairs. “The fact Dr. Ware is originally from this area is not only an obvious advantage as he knows the community well but it also will bring a great sense of renewal which goes hand in hand with Dalton’s initiatives. His knowledge of museum culture promises to bring the Bandy Center and Dalton State to new heights.”

Ware will seek accreditation for the Bandy Center from the American Alliance of Museums, which ensures a high level of preservation of artifacts collected.

“A great example is the bedspreads of Sandra Mahs, which are on display now at the Old Dalton Freight Depot Gallery,” he said. “She collected out of homesickness then thinks, ‘What am I going to do with these bedspreads? Where can I put these so they’re cared for?’ That’s my hope for everyone. We’re a place that knows what your history means, and we’re in a position to care for it so your children and grandchildren can tell who you were.”

Ware plans to begin collecting and archiving items immediately, beginning with some of his own contributions. The heritage center will continue its focus on the Cherokee Nation, the Civil War, and carpet/flooring. But it will branch out to other areas of Northwest Georgia as well.

Junior Achievement once designed a Dalton board game called Biznopoly that mimicked the game Monopoly, which Ware is donating. 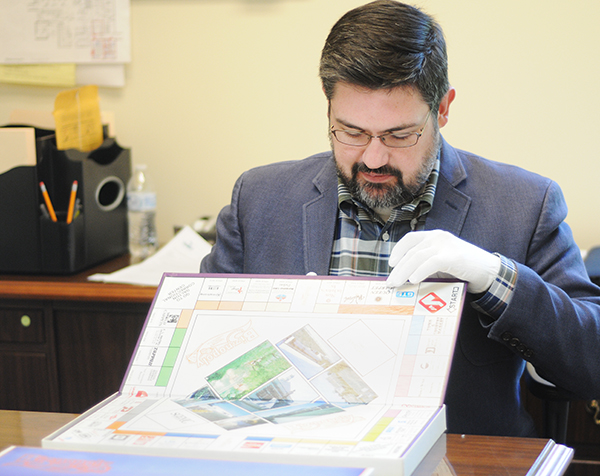 “This came out when Dalton was hitting its full industrial stride in carpet,” he said. “When you talk to people my parents’ age, they won’t think of items like this as a big deal, but when you ask what they remember about the game they don’t remember as much as they think they do. Traditional history says this isn’t old enough to be historic. It’s important to collect recent history like this and preserve it so it’s not gone. This would have been entirely ordinary to the people who used it, but it’s historic and exotic to another community.”

The game has GTE, a telephone company, as the number one piece of property on the board. And Shaw was number four at the time. Most of the businesses on the board game don’t even exist anymore, such as Queen Carpet, World Carpets, and Professional Travel.

As a former member of the Dalton High School Catamounts Marching Band, Ware is donating old football programs and band programs to the heritage center, as well.

“You may not think recent history is important but if I said I was going to tell you history of Northwest Georgia, and didn’t mention longtime Murray County High School football coach Bill Napier or longtime Dalton High School football coach Bill Chappell or that rivalry that’s an incomplete history,” Ware said. “They may not hold the same sway as Mr. Jack Bandy or Mr. Bob Shaw but they absolutely shaped my life. That’s what I mean when I talk about the lived history of this area. The preachers, football coaches, county fairs. These are the things I want to recover.”

Ware hopes to see the heritage center reflect the vitality of what it’s like to live in Northwest Georgia.

“Carpet is a part of our history, but so is going to ride the Scrambler at the Northwest Georgia Agricultural Fair every October and so is hiking Fort Mountain,” he said. “I want to collect items that show those things so people will know what it was like to be part of the area. You end up saying this area is about carpet, but Dalton and the surrounding cities are about a million other things. It’s more complicated than that. It’s carpet and how that relates to the area and how everything else relates back to carpet.”

And though Ware wants to collect items from every aspect of the region, carpet is still important as well.

“You get a lot of people who would say ‘it’s just the carpet industry,’” Ware said. “One of the things that interests me most is it’s one of the largest industries begun by women. These women made something out of nothing. It was artistic and beautiful, but it was also a sustainable business. The carpet industry continues to change. There was a time when Dalton wasn’t about carpet, and there’s still a part of Dalton that’s not about carpet. Before bedspreads, the biggest industries were iron and steel, and gospel songwriting and printing.”

Ware began working with the Orange County Regional History Museum in Orlando while working on his doctorate in American Religious History from Florida State University. He earned a master of arts in religion and a bachelor of science in psychology, both from The University of Georgia.

While at the regional history museum in Orlando, Ware was responsible for recovering items such as notes, candles, and rosaries left at the scene of the Pulse Nightclub shooting.

“The Pulse massacre hit me hard because my apartment was about seven blocks away,” he said. “It was closer to me than Dalton State is to the Dalton Convention Center. Suddenly my collecting area is home to the deadliest mass shooting in American history at that time. We had to figure out how to do our jobs while grieving. History is tracking change over time, and when an event like that happens, change is happening day to day.

“No matter what we are collecting, whether it’s an event like Pulse or the carpet industry in Dalton, we want items that tell the story,” Ware said.

“It is my hope Dr. Ware will bring a fresh new look to the Bandy Center,” Chute said. “I want to see him bring exhibits that will engage individuals of all ages, and this would include the use of technology in some manner to enhance engagement.”

There’s a difference in a hall of fame and a heritage center, Ware said.