Nearly six years to the day since he was named to the position Tony Ingle is stepping down as head coach of the Dalton State Roadrunners basketball team. His retirement is effective Aug. 1. 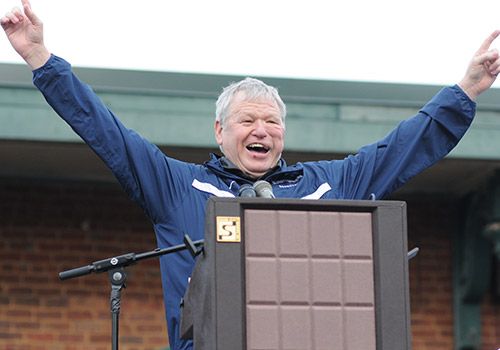 “Tony Ingle is and will always be part of the soul of Dalton State’s basketball program,” said Dalton State President Dr. Margaret Venable. “He is so much more than a coach. He is a mentor, a motivator, and a friend. He has touched the lives of countless young men and inspired anyone who meets him. We won’t say goodbye to Tony and his family because they will always be a part of the Roadrunner team. I just wish Tony and his family all the best in the coming years.”

“I’m the luckiest man in the world to get to coach at my alma mater,” said Ingle, 66, who in his storied 44-year career coaching men’s basketball led two teams to national championships, including Dalton State’s 2015 NAIA championship in only its first year of tournament eligibility. In addition, Ingle is a four-time national coach of the year, most recently in 2017.

“It was an honor to get to coach the Dalton State Roadrunners. I will always cherish the many memories and friendships that I’ve made over the past six years,” he said.

In June 2017 he answered the call to lead the Dalton ward of The Church of Jesus Christ of Latter-day Saints as bishop, a position in the Mormon church akin to pastor. The LDS church is a volunteer organization with members serving in leadership and staff roles.

“Being called to be the Bishop for The Church of Latter-day Saints was very challenging last season, and I just can’t put my full heart into basketball coaching at this time,” Ingle said. “However, I have always known once I did retire that I wanted to help build our society by coaching from the podium.”

Ingle, a popular presenter and author of the memoir “I Don’t Mind Hitting Bottom, I Just Hate Dragging,” intends to pursue public speaking opportunities in retirement.

During his five-season run as Roadrunner head coach, Ingle built an impressive 134-33 record, and led the Roadrunners to two conference championships in addition to the 2015 national championship.

“I have had the privilege to work with Coach Tony Ingle in three different conferences over twenty plus years, said Mike Hall, commissioner of the Southern States Athletic Conference. “He has loved the game of basketball and knows it is just a game; however, he loves his players and knows it is not just a game. He has faithfully demonstrated his love for each of his players. The Championships were nice, but his demonstrated love will leave the most lasting mark on his outstanding career.”

Ingle’s history with the Roadrunners extends back to his student days as a player on the 1971-73 Dalton Junior College teams under Coach Melvyn Ottinger. The Roadrunners won state and regional junior college championships in both his freshman and sophomore years. He concluded his playing career at Huntingdon College in Montgomery, Ala.

After earning his degree in physical education, Ingle returned to Georgia where he coached at the high school level before entering the college ranks. He was the architect of a winning program at Gordon College where he recorded 61 wins and 32 losses over three seasons. In his final season, Ingle led the Highlanders to a regional championship game.

He went on to join Coach Roger Reid at Brigham Young University in Provo, Utah in 1989 and served as an assistant coach for seven seasons. BYU won two Western Athletic Conference tournament championships, one WAC regular season championships, and went to the NCAA Tournament during five of those seasons.

After leaving BYU, Ingle worked as a scout for the NBA’s Utah Jazz and as a sports color commentator for the Mountain West Conference.

In 2000, Coach Ingle took over a struggling Kennesaw State basketball program and quickly turned it into a NCAA Division II national power, soon setting a season record of 25 wins followed soon after by the Division II National Championship.

Ingle holds the distinction of winning two national collegiate championships and of being the only Georgia coach named coach of the year at the high school, junior college, and collegiate level. 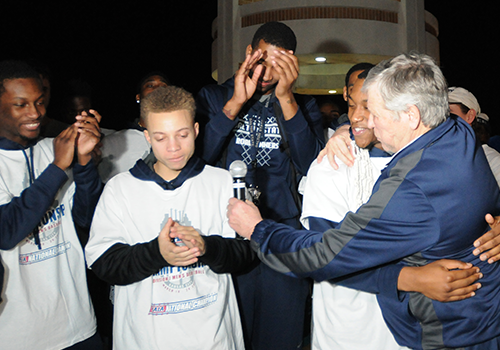 “What an honor to work beside Tony Ingle,” said Dalton State Athletic Director Jon Jaudon. “He has demonstrated over a 44-year career a determination and commitment to make a difference. A difference on the basketball court through the many victories, in the lives of his players through the lessons he taught, and to anyone within the sound of his voice.

“This decision, I know was a hard one, but I truly believe Tony wants the opportunity to reach even more people, in order to make a difference,” Jaudon said. “The game of basketball has been blessed to have Tony Ingle make a difference and many more will now have that chance as well. Coach, may your words reach far and wide for many years to come.”

Ingle says retirement will allow him more time to devote to his church, public speaking, and to his family which includes wife, Jeanne, four sons, one daughter, and 10 grandchildren.