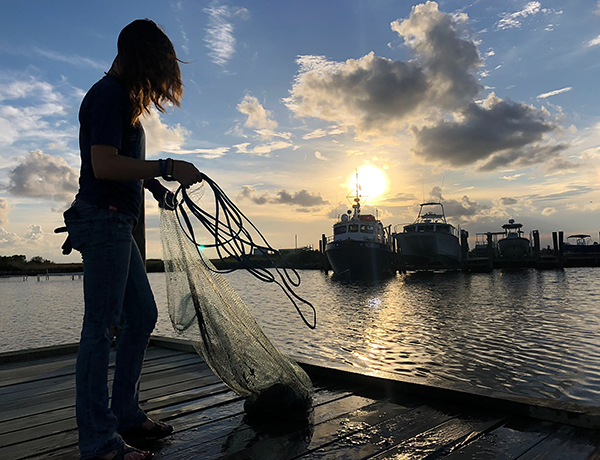 Cody Beavers spent his summer surrounded by forest that hadn’t been touched in a significant way by man in at least 150 years.

The trees towered above him and many would have taken more than one person to reach all the way around them. Beavers lived and worked in the forest; it’s an experience he knows not many people have.

Beavers, along with Kaytlin Pepper, are both biology students at Dalton State College who landed a spots in one of the National Science Foundation’s exclusive Research Experiences for Undergraduates programs. Pepper is spending her summer at the Louisiana Universities Marine Consortium while Beavers is spending his at Eastern Kentucky University.

“The NSF REU is one of the most prestigious opportunities for which an undergraduate in the sciences can be selected,” said Dr. Kim Hays, assistant professor of biology. “Beyond its competitiveness, REUs provide amazing opportunity for the recipients. Students, like Kaytlin and Cody, are immersing themselves in science for 10 weeks and receiving one-on-one mentoring from some of the best graduate students and faculty in the country. REU participants are pushed out of their comfort zones and grow professionally and personally in these short few weeks. The experience and training, the professional connections, and the opportunities that come with an REU cannot be matched. 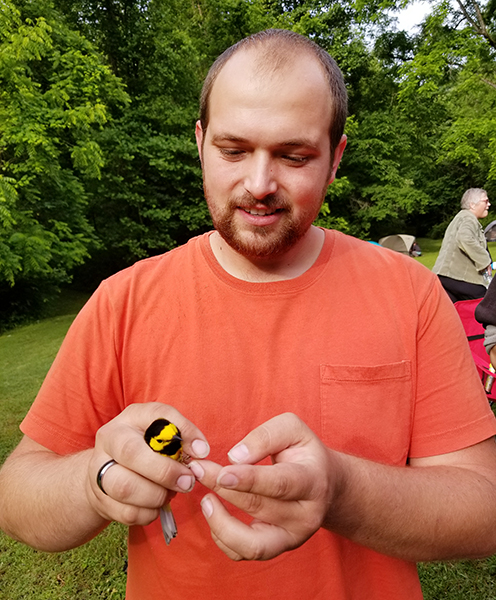 “Dalton State’s School of Science, Technology, and Mathematics helps prepare students for REUs and other experiential opportunities by our commitment to mentoring and undergraduate research,” she said. “Both Cody and Kaytlin have been involved in projects on campus that allowed them to develop close relationships with faculty and apply the skills they have learned in the classroom.”

Beavers, a nontraditional student expected to graduate summer 2019, spent his summer looking at the effects of mining in Appalachia by studying insects in streams. One stream is in an area that has been mined and another is a stream that hasn’t been disturbed by logging or mining in at least 150 years.

“I can’t even put into words how much I’ve learned here and the experiences I’ve gained,” Beavers said. “I was living at a research station carrying out a project that I designed on my own. My advisor gave me a general idea, told me to design a study, and then bring back literature to back it up. I spent three weeks living and collecting data that I’m now analyzing. I’ve gained so much knowledge and experience.”

Beavers was asked specifically to apply to the REU program by someone he met while presenting research he’d conducted at Dalton State at a conference. He was chosen out of approximately 300 applicants for the program.

“I enjoy the research I’m involved with at Dalton State,” he said. “I work on leaf breakdown rates and macro invertebrates in the stream on campus with Dr. John Lugthart. He, along with Dr. Hays, have made a massive impact on me. A few years ago I never thought I would be interested in pursuing a degree higher than a bachelor’s degree, or majoring in biology for that matter.”

Before enrolling at Dalton State, Beavers was making a living as a restaurant manager. But he was at a place where he couldn’t move forward without more education. He fell in love with an intro to biology course and decided to make that his major.

Pepper is working with grass shrimp, testing viable levels of salinity. Grass shrimp typically live in salt water, but efforts to rebuild the Louisiana Coast where it is eroding would mean habitats are flooded with different levels of fresh water. 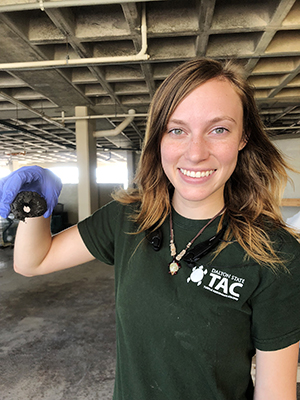 “The biggest experience is being able to start from the ground up building my own research project,” said Pepper, who is expected to graduate in spring 2019. “I am working very independently. The research opportunities I’ve had at Dalton State have helped build my confidence so I could step into this role with ease. The biggest things I’ve had to learn are because I’m used to living and working in the mountains and streams but here salinity is a factor.”

Pepper was challenged by having to learn new species she’d be working with. She also had to learn to trap shrimp and learn all about the plumbing required to maintain habitats for the shrimp. At Dalton State, Pepper helps with the Turtle Assurance Colony but also conducts research on the salamanders found in the creek that runs through campus.

She knows this is a special opportunity that has led her to meet renowned biologists and network with other students.

“I am living and breathing science for 10 weeks,” Pepper said. “REU students have a tendency to stand out when it comes to applying for graduate school and jobs because of that.”

Both students are looking toward graduate school as their next step.