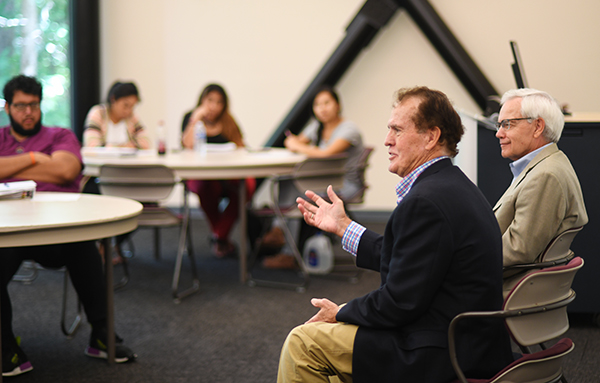 Two former congressmen wanted students at Dalton State to know they have a voice.

“They encouraged me to not be intimidated by politics,” said Peter Anderson, a social work major. “They said we have a voice, and we should use it. They told us how to network to find people with common concerns and goals to make our voice louder. We don’t have to take on that lion by ourselves.”

Dr. Phil Gingrey, a Republican who served Georgia in the House of Representatives, and Bob Clement, a Democrat who served Tennessee, spoke to several classes on campus for Constitution Day and hosted a public forum through the federal Congress to Campus program. The day was geared toward informing people about the role of government and how to be civically engaged.

“I really wanted to expand our Constitution Day program and help our students make a real life connection between what they learn in the classroom and what happens in the government,” said Heather Williams, assistant director for leadership and civic engagement at Dalton State. “We want students to learn how they can be civically engaged, whether that’s through voting, running for office one day, or through policy. Events like this help shed a light on the process.”

Gingrey and Clement fielded questions dealing with the history of American government and current issues as well as all the steps policies and laws must go through. They provided students understanding of the process while offering opinions.

“Part of the problem with the current government is that they don’t know each other,” said Clement, who served from 1988 to 2003. “How can they work together if they don’t know each other? Their time in Washington, D.C. has been reduced, and we used to have retreats on the weekends. That’s why I think we have so many stalemates now. I’m worried about the current administration and how it will affect young people.”

Students expressed concern about the Supreme Court nomination and asked what it means for them since many justices serve 30 years or more.

“This is an important decision,” said Gingrey, who served from 2003 to 2015. “This is to replace former Justice Anthony Kennedy, who was a swing vote. Justices are in place for life unless they resign or retire.”

Both former representatives said senators take the job of appointing justices seriously, and they are confident in the process and their decision.

The men encouraged students to speak up and talk to not only their legislators but advocacy and policy groups that work with legislation, especially on issues students asked about, such as veterans, immigration, and Medicaid.

As part of Constitution Day programs, Dalton State also hosted a reading of the Constitution and is holding a voter registration fair.

On Thursday, Dalton State hosts a meet the candidates event at 6 p.m. in the upper level of Pope Student Center. It is free and open to the public.