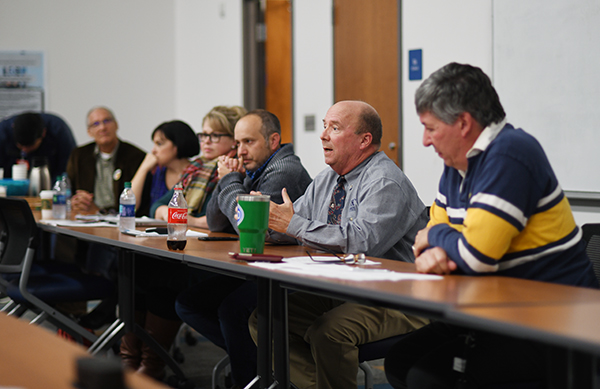 The American society has been trained to think “fake news” is a recent phenomenon that began with the last few election cycles.

But it has a much earlier presence in America, said Dr. Seth Weitz, a professor of history at Dalton State, during a news credibility panel discussion at the College. On the faculty panel were representatives from history, political science, communications, education, and biology. Dalton State recently hosted two panels aimed at helping people discern the credibility of news.

“Let’s go back to Thomas Jefferson,” Weitz said. “If you think recent presidential elections were nasty, research the election of 1800. It was one of the nastiest in history.”

John Adams claimed if Jefferson won the presidency that men would see their daughters and wives become prostitutes and that things like murder, robbery, rape, and adultery would become commonplace. On the other side, Jefferson claimed Adams was a warmonger, lied, was a repulsive pedant and hypocrite, and a British bootlicker.

Then around the turn of the 20th century yellow journalism fueled “fake news,” Weitz said. Yellow journalism started with Joseph Pulitzer and William Randolph Hearst who owned newspapers and were competing for readers and sales. They began sensationalizing the news, using big flashy headlines, and stories with little truth.

Eventually television networks realized they could begin making a profit off their news broadcasts and in the 1980s television news started focusing on ratings and money, said Dr. Ken Ellinger, professor of political science. This led to more opinion-based reporting, he said.

“That spiraled to the point it is at now,” Ellinger. “The media is a business, and they’re going to give us what we want, what brings in the most ratings and the most money. Americans don’t want to dig for their news.”

The rise of the internet and digital age throws another factor into fake news. Often people share memes on social media without researching their validity. People share stories without reading anything except the headlines, which are often misleading.

“We all like the news that agrees with what we already think, and we reject that which does not,” said Amy Mendes, a lecturer in communication. “We let our emotions guide what we believe and don’t believe instead of our intellect.”

Our biological makeup plays into how we react to news, said Dr. Gene Mesco, associate professor of biology whose background is in physiology.

“When an emotional response starts, it’s hard to stop it,” he said. “It’s who we are as a species.”

Everyone is biased, Mendes said. So of course news will also be biased.

But admitting and acknowledging our bias and why we have it is the first step in discerning news, she said. Another is getting away from social media as our primary source of news and instead go straight to the media sources we trust. She also encourages people to check stories across multiple sources.

“The internet doesn’t drive you,” Mendes said. “You drive it. Go to the news sources you trust and read there first. Then go to another source and read it there. And if you see something on social media, Google it before believing it or sharing it.”