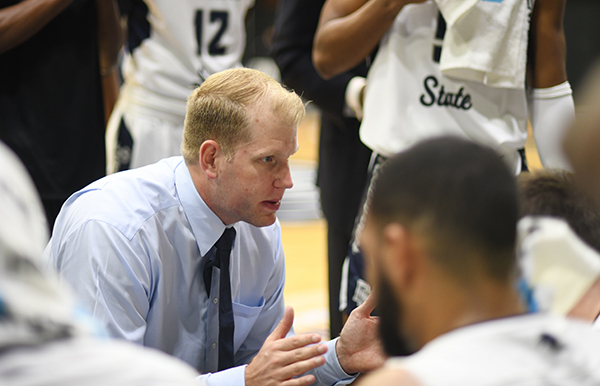 “I am pleased to announce Alex Ireland as our basketball coach,” said Interim Chief of Staff Jon Jaudon.  “Alex demonstrates a commitment to the mission and values of the College and Athletic Department. He takes very seriously the role of coach and has the work ethic and character necessary to achieve at the highest level. I could not be happier that he will continue leading men’s basketball.”

Ireland joined the Dalton State staff as an assistant coach before the 2017-18 season. Before beginning with the Roadrunners, he was an assistant coach at Alcorn State (2015-16) and UT-Martin (2016-17). From 2013-15, he was a graduate assistant at Valdosta State where he received his master’s degree in higher education leadership.

The Lawrenceville native assumed the reins of the program from Tony Ingle, who retired Aug. 1. Building upon the foundation that Ingle set, Ireland led Dalton State to an 18-13 record in 2018-19 and a fifth-place finish in the SSAC regular season standings.

Jaudon added, “Coach Ireland welcomed nine newcomers to the roster. The way he engineered their development over the course of the season was dramatic.”

His interim season included wins over three ranked opponents, while the Roadrunners narrowly missed out on an at-large berth in the NAIA Tournament. He will welcome back a solid nucleus of players that can help the team compete for conference and national honors in 2019-20.

“It is a tremendous honor to be named head basketball coach at Dalton State College,” Ireland said. “I am very grateful to President Margaret Venable and Jon Jaudon for their faith in me and allowing me to continue to serve Dalton State in this role.”

Under his guidance, the Roadrunners enjoyed their sixth consecutive winning season since joining the NAIA with junior Sean Cranney leading the SSAC in assists at 4.84 per game. Also, senior forward Elijah Staley and junior guard Randy Bell were named as All-Conference performers. Ireland infused the roster with young talent that is savvy on the court and in the classroom.

“We have very exceptional young men in our program, and we are proud of their accomplishments this year both on the court and in the classroom,” Ireland said. “I hope to build upon the rich history and tradition of Dalton State basketball and continue to produce results that make our community proud.”