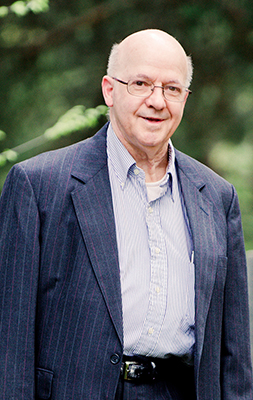 The following piece was written by David Elrod, director of the Dalton State Foundation, about the passing of longtime Dalton State professor Dr. George L. Jones. Elrod, Dalton Junior College class of 1988, is a former student of Jones.

Word came this weekend that Professor Emeritus of History Dr. George L. Jones had died in his native Newberry, South Carolina, at the age of 76. George was one the longest-serving faculty members in Dalton State’s history, having taught full-time here for more than three decades and then part-time in his “retirement” for a decade more. When he turned in his last grades in 2013, it was the first time in 129 semesters that he wouldn’t be coming back for the next one. He was a teacher par excellence, he was a real character, and he was my friend.

I met George for the first time in 1986 when I was a student. He was my faculty advisor and later my professor. I cannot begin to enumerate the ways in which George helped me while I was a student at then-Dalton Junior College but suffice it to say that I can name five formative influences on my entire collegiate career, and George was one of those five. We stayed in touch over the years, and then he called me a few years ago to say goodbye just before he moved back to Newberry to be near family who could take care of him as he struggled with Parkinson’s Disease. That was George being George: he was one of the most thoughtful individuals I’ve ever known.

When he retired in 2013, George reminisced with me, and I took notes just like I had done while listening to him a quarter-century before.

“I almost didn’t get here,” he remembered. “The College had already hired someone for the position, but he was drafted for the Vietnam War and so that created an opening that I ultimately filled.”

George had earned his master’s degree in history at the University of Georgia and arrived here “ABD” – “all but dissertation” – in September 1970. He earned his doctorate from UGA a year later with a dissertation on Georgia politics in the post-Civil War/Reconstruction era. He had caught the history bug as a youth, but he took the long way around to the profession. He came to history not through books but from being around the elderly from a young age.

“We were poor; we couldn’t afford books,” George recalled. His father was a grocer, and his mother was a homemaker. George was the seventh of eight children. “Ever since I was a kid, I liked old things. I liked old people. I learned more from them than I learned playing outside.”

The lack of books and the lack of a desire to read finally caught up with him. “In high school we had to do book reports,” he told me. “I didn’t read the books. I just made it up, title and author. I didn’t like to read, so I didn’t read until I got to college and really had to do the work in order to make the grades.”

George appreciated the irony that he got into a profession that depended on books and reading. He was a gifted classroom teacher, pushing his students and inspiring them, earning their respect and admiration, even affection. A decade or so ago one of George’s former students, Chris Patterson ’84, endowed a scholarship in honor of the professor who had such a profound impact on him. The George L. Jones Scholarship in History will be here forever. George said that having a former student endow a scholarship in his name was the highest honor he had ever been paid.

“There is satisfaction in teaching. There was a connection there,” George said of his time in the classroom. “One of the students I taught in my first year here is one of my best friends. Two of my former students are now my doctor and my dentist. Dalton State means the world to me. It’s been like therapy. I’m sure I’ve taken more from it than I’ve given to it.”

Godspeed, George. We’re proud to call you one of ours.