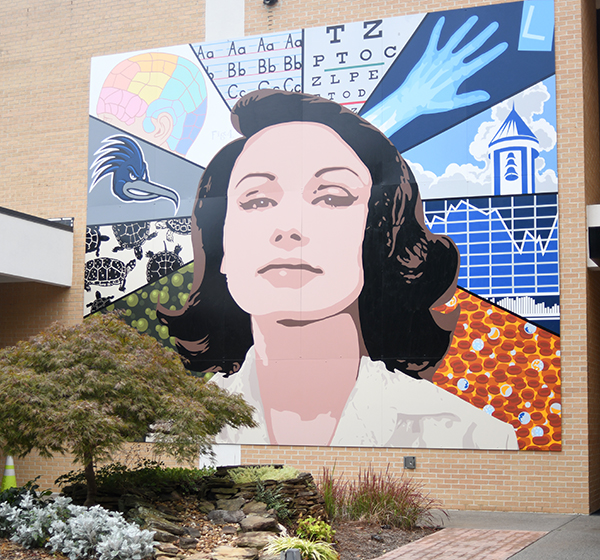 A new mural hanging on the exterior wall of Roberts Library serves as a reminder that Dalton State is a gateway to any path a student chooses.

The mural, designed and painted by Chattanooga-area artist Kevin Bate, features the face of a woman with different Dalton State-specific images behind her, such as the bell tower, turtles and an x-ray.

“I wanted to design something that would reflect the campus itself,” Bate said. “I wanted to show what may be a student on campus and radiating behind that student is all the pathways you could take. It’s not just about a specific academic program, but it’s about the possibility of doing anything.”

Bate is known for his artwork featuring faces. Many of his murals can be seen throughout the streets of Chattanooga, including the Fallen Five on McCallie Avenue and the technology leaders on Frazier Avenue. He’s also the artist behind the Dalton heroes mural near the Waugh Street Bridge in downtown Dalton.

The original plan was to place the Dalton State mural on a retaining wall at the intersection of College Drive and Walnut Avenue.

“The mural design was such a beautiful work of art we decided we would rather put it on campus where it can be more easily viewed than on a wall only seen by cars as they pass by,” said Dr. Margaret Venable, president of Dalton State. “Our hope is to enhance artistic interest at the campus and celebrate some of the wonderful aspects of Dalton State through the eyes of the artist. I think each person might interpret the mural differently, but we can all see elements of Dalton State. We asked for it to be painted on panels so it can be easily moved if we need to. For example, we hope to see a renovation of Roberts Library in the coming years, and we didn’t want the mural destroyed.”

Painting the mural on pieces that could be moved was new for Bate, who is typically commissioned to paint directly onto brick or block walls.

“My first answer when asked if it could be mobile was, ‘Absolutely!’” he said. “But I didn’t automatically know how to do that.”

After some research, and connecting with other artists, Bate learned about an aluminum composite product called Dibond that is often used for signage. It is resistant to weathering and UV rays. He also installed the mural so it isn’t flat against the library’s exterior wall, which should further help protect it from water damage, he said.

Because the piece is so large, 24 feet by 20 feet, panels were painted separately and weren’t placed together until it was hung.

The mural is part of a larger effort through the Creative Arts Guild called 1000 Words, which aims to facilitate public art projects throughout Dalton.