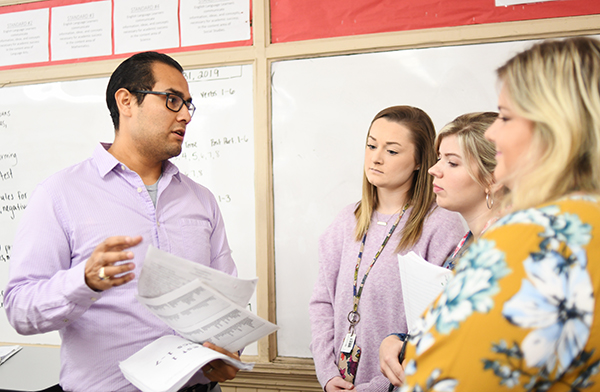 Miguel Gonzalez knew as an adolescent he wanted to be a teacher when he grew up. But it wasn’t going to be easy because of his immigration status.

There were times Gonzalez, a 2007 graduate of Dalton State, wasn’t sure he would see his dream come true. Now he teaches English to students at the Newcomer Academy, which helps students with language gaps, at Morris Innovative High School in the Dalton Public School System.

He was recently awarded the Northwest Georgia 2019 Mentor Teacher of the Year by Georgia's P-20 Collaborative for his work mentoring teacher candidates enrolled in Dalton State’s School of Education. He was nominated by Dr. Sharon Hixon, dean of the School of Education.

“This is the first award I’ve ever gotten,” Gonzalez said. “To think, many years ago I never thought this was possible. It makes me think of my mentor teachers. It literally took a village to get me to where I am. I think about how hard it was and my mentor teachers who helped and are still helping me.”

Gonzalez came to the United States when he was 8 years old. He was undocumented, and as he continued through school, he realized his status would limit his education and his career options.

“I knew that was my situation,” Gonzalez said. “In high school that’s why I almost didn’t go to college. I assumed I wouldn’t be able to get an education because I was undocumented. A high school counselor called me into her office to find out why I wasn’t applying to college, and after I told her, she said, ‘That shouldn’t keep you from college.’”

Gonzalez enrolled at Dalton State in 2005 as an early childhood education major knowing he wouldn’t be able to work in local school systems unless his immigration status changed.

“In my culture, you stick with your family,” Gonzalez said. “I grew up knowing I wasn’t allowed to go away to college. I was so blessed to have Dalton State here. Not only is there a college here, but they provide a great education. I received my work ethic from my years in the education program there. The amount of work you do and the type of work you do transfers to teaching in a classroom. I was prepared for what I’m doing now.

“My time at Dalton State was bittersweet,” he said. “I knew after graduation there was nothing I could do with my degree. I knew that.”

In 2012, Deferred Action for Childhood Arrivals (DACA) opened the door for him to teach. Six years after he graduated from Dalton State’s education program, Gonzalez entered the classroom as a teacher. He now has a green card and is counting down the years until he can apply for citizenship. 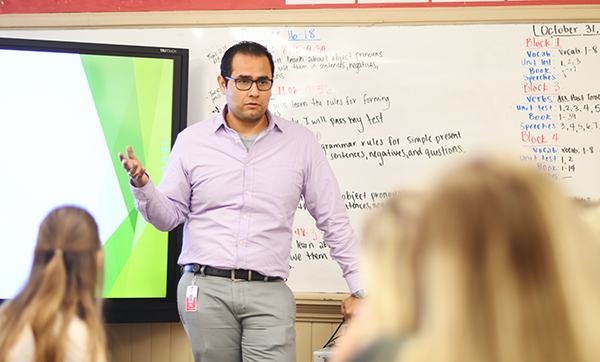 Gonzalez uses his position and his experience to help teacher candidates at Dalton State learn more about the community and the students they’ll be teaching. It’s important to Gonzalez teacher candidates learn teaching is more than meeting standards such as, in his case, grammar. It’s also about making students feel safe and cared for.

“You can tell Miguel loves what he does,” said Camaryn Sloan, a junior education major at Dalton State. “He’s a great role model. You can see how Miguel connects with his students and shows them he cares about them. Teachers need to be able to show students they are loved, and he does. He never gave up. He persevered through everything that came to him.”

Teacher candidates at Dalton State spend time in classrooms in area schools throughout the program.

“Getting to observe Miguel and speak with him about what he does and why just adds to Dalton State’s amazing education program,” Sloan said. “We’re going to graduate with well over 1,000 hours of field experience. We’re graduating with as much time in a classroom as many first-year teachers. We just haven’t had a classroom to ourselves yet. Dalton State is giving me the perfect opportunity to learn and grow.”

Gonzalez has hosted teacher candidates seeking the English as a Second Language (ESOL) endorsement for four years, meaning he has facilitated observation hours for hundreds of candidates, Hixon said.

“Miguel exceeds expectations as a mentor,” she said. “He has six years of teaching experience, serves on school and district leadership teams, is lead teacher in the Newcomer Academy and is currently supporting three new teachers in the program.”

Observing Gonzalez and the Newcomer Academy was different than any other experience Riley Rule, a junior early childhood education major, has had. It was also more rewarding for Rule.

“I could relate to Miguel,” she said. “He showed us what to expect. His energy and encouragement say a lot about him – and the education program at Dalton State. You can tell he enjoys what he’s doing, and he’s successful at it. He is able to touch the lives of many different ages and students of many different background. It’s an example of a positive and open classroom.”

Gonzalez gives teacher candidates handouts with standards outlined and explains why he instructs students the way he does.

“It was extremely eye-opening,” said Macie Chastain, a junior early childhood education major. “He offered explanations and information whenever possible. I learned patience and how to make it translate into a classroom setting. Some of those students don’t know any English, and it is awesome to see how they receive interaction and knowledge in a way they can understand and gain from it.”

Gonzalez knows what it is like to be new to the country and not know English. His success is thanks to the many teachers who helped him along the way.

“That’s how I became inspired to be a teacher,” Gonzalez said. “So many teachers took me under their wings, especially Carol Satterfield in seventh grade at what was then Dalton Junior High. When I saw what she did with her students is when I decided to become a teacher. She took care of us outside of school. She even took us to soccer games. I thought that’s just what teachers did.

“She stayed an active part of my life,” he said. “She’s even the one who went to Dalton State’s orientation with me. Typically you go with your parents, but my parents didn’t go to college and didn’t know how to help me. Everyone else had their mom or dad with them, and I had Mama Carol.”

A counselor in high school helped Gonzalez find private scholarships he qualified for.

Gonzalez tries to be like the teachers he had. 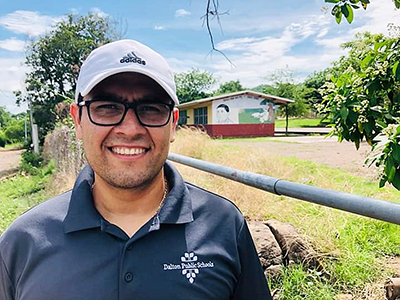 “Our kids at the Newcomer Academy appreciate school and an education,” he said. “They come here to learn. Where most of them are from, a good education is either expensive or nonexistent. They come here and are able to feel safe.”

Gonzalez traveled back to his hometown in Mexico for the first time over the summer, and nothing has changed about his childhood home or school. There has been no progress or improvements.

“My kids are amazing,” he said. “They have to learn English and learn it fast. Time starts ticking to graduation, and no one gives these kids their graduation. They still have to take every Georgia credit and test every other student does, but they do it in a language that’s not native to them. I’m in awe of how hard they work. I’m so honored to get to teach them and know them.”