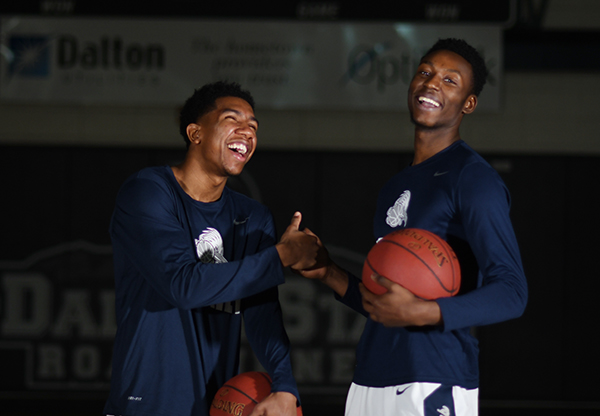 Kingston Frazier and C.J. Perry had always been rivals on the court.

But now, at Dalton State, Frazier and Perry are teammates for the first time in their basketball careers.

Their lifelong competitive friendship and mutual respect spreads throughout the team, bringing members closer together and raising their level. Coach Alex Ireland says it has impacted this season tremendously.

The No. 3 Roadrunners are 23-1 and are on a 16-game winning streak, the most consecutive wins in the school’s history. There are five games left in the regular season and a good chance at participating in the NAIA National Championship, which will be announced March 11. The Roadrunners won the national tournament in 2015.

The Roadrunners face Martin Methodist College on Saturday at 2 p.m. at Mashburn Arena.

“This is a really exciting and fun season,” Ireland said. “It is more than just the winning record. We have the pleasure of coaching the quality young men on this team. Our record is a reflection of them. These guys’ selflessness, caring, toughness, grit and determination have led to our success. Kingston and C.J. are phenomenal examples of that.”

Frazier and Perry, both guards studying interdisciplinary studies with a minor in health and wellness, bring different qualities to the team.

Frazier is not playing this season due to a preseason injury. Doing so will leave him with one more year of eligibility in college sports. But being on the bench doesn’t stop Frazier from contributing.

“Kingston is tough and competitive,” Ireland said. “If the team is losing, all of a sudden he stands up and says he’s not going to stand for it. The guys play harder to match his intensity and demands. He’s very good for our team and team morale and competitiveness. C.J. is a little quieter. He hit’s six three-pointers in one game and other tough shots. They’re both the kind of young men we want on this team because they make everyone around them better.”

More Than a Game 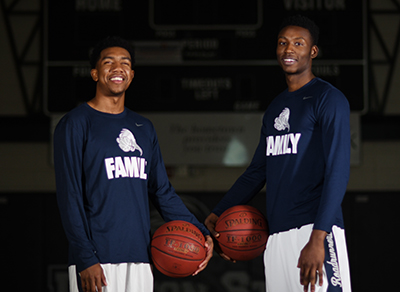 Where Frazier and Perry grew up, basketball is more than a game. It’s a way of life. It brings people together and keeps them off the streets and out of trouble.

After Frazier’s cousin was shot and killed, he created a summer basketball league for young men in Opelika, for which he received the 2019 Young MLK Community Service Award given by the National Forum for Black Public Administrators – East Central Alabama Chapter.

“I wanted to give people an alternative to the stuff that’s not a constructive use of time,” Frazier said. “Violence. Racism. None of that matters in sports, when you’re on the court. Basketball gives you a chance to play with others, gives you camaraderie. The love of the game stops people from committing crimes.”

Frazier and Perry want to use the sport to inspire others to follow their dreams, especially in their hometown.

“We’re so proud because we have a lot of talented people back home who could go play somewhere, but something happened and they didn’t go,” Frazier said. “We’re so blessed we’ve been able to take the game to the next level. We were raised to have a tough mentality. But we put it on the court. It’s more than getting a 9-5 job and just working the rest of your life. Chase your dreams.”

Perry knows he’s been given a great opportunity, that not everyone where he’s from receives.

“We’re not the only great players out of Opelika,” he said. “Sometimes it’s about the decisions you make. We’re genuine when we say we want to see everyone from Opelika be something. We want to be the example to follow, in a humble way, because we know they can do it, too.

“We want to instill in others to chase their dreams,” he said. “We want to show other people what they can do by not giving up.” 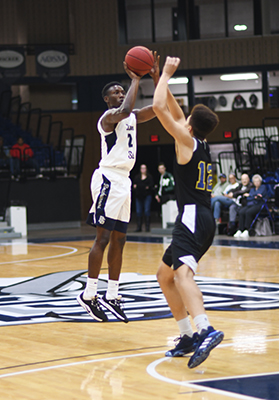 Frazier and Perry had mutual friends and knew each other thanks to the game. Over the years their competitiveness on the court turned into mutual respect, which led to friendship.

“Pickup games are popular where we’re from,” Frazier said. “Whether you play basketball or not, you meet up at the gym, even if you’re from neighboring cities. C.J. and I would go to the gym, and we’re like, ‘What’s up bro?’ We kept building off that.”

“Mid-season the coach asked me to see if C.J. wanted to come play with us,” Frazier said. “I said, ‘I’m going to call him right now.’ So I called and told him, ‘Coach wants you to come hoop,’ and after that, that’s all she wrote.”

“It was time to get to business,” Perry said. “I locked in on what I had to take care of to get here. This was something we always wanted to do. Coming from rec ball, we came a long way. It was a dream.”

Perry says Frazier has similar skills to those you see in the NBA.

“Every time he plays, he’s going to give it his all,” he said. “I didn’t see us playing together, but I was so happy find out he was going to be my teammate. The way he plays is perfect.”

Frazier says this is a special season with a lot of talent and hard-working teammates.

“What C.J. is doing this season isn’t surprising to me,” he said. “He always had bounce. He’s always been athletic. To see his growth on a collegiate level, and on a nationally ranked team, is crazy to see.

“If you come watch us play, you’re going to see a team that’s like brothers,” he said. “We have so many players who just click. We all want to see each other do well. When Randy Bell won player of the week, we all jumped on him at the end of the game. We’re each in our own lane, but we’re there for each other.”

Attending Dalton State, and playing on the team, has been a positive influence on Perry.

“This school has opened my mind,” he said. “I see the life I’m living and I see how it’s changing me, and I’m doing something positive. It fits me to be here. It’s serious and constructive. When you come here, you’re going to work hard on and off the court.”

Even with the winning record this year, Frazier and Perry haven’t locked in their goals yet. So they keep pushing each other to be their best.

“It’s a team you’ll never forget,” Perry said. “You know when you leave it, you’ll take something with you to spread. Our coaches tell us it’s more than basketball. They’re instilling in us what we need to be men. This team is nothing but love. It’s a brotherhood.”

“After graduation, we’ll continue to aspire to reach our dreams in the basketball world,” Frazier said. “We feel we have the talent and tools to take with us. We’re going to continue to strive for greatness. We’re here because of God. Whatever God sees for us next, that’s what we’re going to do.”

No matter what is next, the two friends plan to keep supporting and encouraging each other.

“We’re going to chase all our dreams together,” Frazier said. “Close it together.”

“Walk the stage together,” Perry added. “Get our degree together. Get our rings together. Then go back home together.”